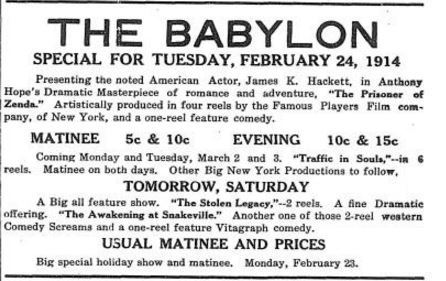 Ground was broken for the original Babylon Theatre on January 24, 1913. The 32 x 100 terra cotta, tin roofed structure was built for Graham M. Polley on Deer Park Avenue, at George Street, by contractor E.W. Howell. (Howell’s company went on to become a prime Long Island builder.) The theatre opened on April 15, 1913.

Nathan I. Goldstein, who operated the Unique Theatre and Star Theatre in Patchogue, acquired the Babylon Theatre in August 1918 retaining Polley as manager.

William D. Eccleston acquired the theatre in May, 1919. His other theatres were in Sayville, Lindenhurst, Hicksville, Central Islip, Westbury and Smithtown.

Eccleston closed the Babylon Theatre in July 1922 complaining that Babylon hadn’t supported him.

Under Polley' management a stage was added for a weekly talent night. It was, subsequent, extensively used for other theatrical experience according to news articles.

In December 1917 an ad proclaimed that “The heating plant has been overhauled and enlarged assuring warmth and comfort at all times.”

Polley announced plans to build an Airdrome seating about 800 next to the theatre for the summer of 1914. There is no indication that this ever happened.

In 1919, Eccleston, who leased the theatre purchased the building and an adjacent lot with a 38 foot frontage on Deer Park Avenue with the intention of building a new theatre at an estimated cost of $40,000. There is no indication that the latter occurred.

According to one article the height of the theatre and the building materials used were chosen to resemble the features of the adjacent Sprague Garage. Presumably the garage was on George Street rather than Deer Park Avenue because of the 1919 article about the adjacent 38 foot frontage on Deer Park Avenue.

The street view should be corrected. The theater would have been located to the south of Sunrise Highway, just on the other side of the railroad tracks. George Street comes into a T interesection with Deer Park Ave. Not sure if the theater was on the actual corner of George and Deer Park, or across the street, opposite the terminus of George St, facing east.

The January 24, 1913 article in the South Side Signal (Babylon) from which I extracted information for the creation of this theatre specifically said the lot was at the corner of Deer Park Avenue and George Street. And, latterly, that it was adjacent to Sprague’s Garage (see reference above).

In March 1914 Manager Polley incurred the wrath of Babylon Village President Edward S. Alley when he wanted to exhibit a five reel film entitled “Traffic in Souls” which depicted methods of white slave traffic. A private showing with the film representative and members of clergy was scheduled so Polley could present his case. Alley stormed out. When Polley tried to show the film he was arrested. He subsequently brought a $10,000 suit for damages against Alley which was eventually settled out of court for several hundred.

In a very poor picture obtained from the Babylon Historical Society one can see that this is a one story building, the name “Babylon” on the facade and an arcade entrance.

Manager Polley was again in the news in February 1914 when he announced that he was going to build an 800 seat air-drome next to, and fully independent of, the Babylon. Matinees and performances in bad weather were to be held indoors. Didn’t happen.

Uploaded a better image of the theater.

Uploaded a photo of an ad from the September 5, 1920 Paramount Weekly indicating the Babylon would be participating in a special exhibiting event.