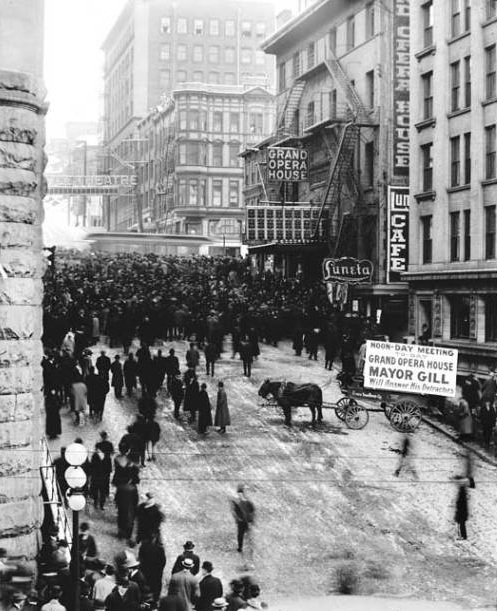 The architect of the Grand Opera House was Edwin Walker Houghton. Although the theater was gutted by a fire in 1917, the building survived. The 1917 fire was actually the second serious conflagration at the house. It had been damaged by a 1906 fire, as well, but the 1917 fire ended its theatrical career. In 1923, what remained of the damaged interior was removed and a parking garage was built inside the shell of the building, and is still in operation as the Cherry Street Garage today. A bit of Houghton’s Romanesque Revival detailing remains intact on the facade.

The Grand Opera House was originally one of John Cort’s theaters, and for a while was the most popular house in Seattle, but it went into eclipse when Cort opened the Moore Theatre in 1907. Construction of the Grand Opera House began in 1898, but it took two years to complete because Cort was short of funds. The basement was completed early in the project, though, and for most of the time construction was going on above Cort operated a combination theater and beer hall called the Palm Gardens there. This was closed when the Opera House opened in 1900.

History Link has a page about the Grand, with the emphasis on the 1917 fire. In 1911 the house had been leased to Eugene Levy, who operated a dozen movie and vaudeville houses in Seattle, Tacoma, and Spokane. After the fire Levy originally intended to rebuild the Grand, but instead ended up leasing the Orpheum Theatre and Third Avenue and Madison Street.