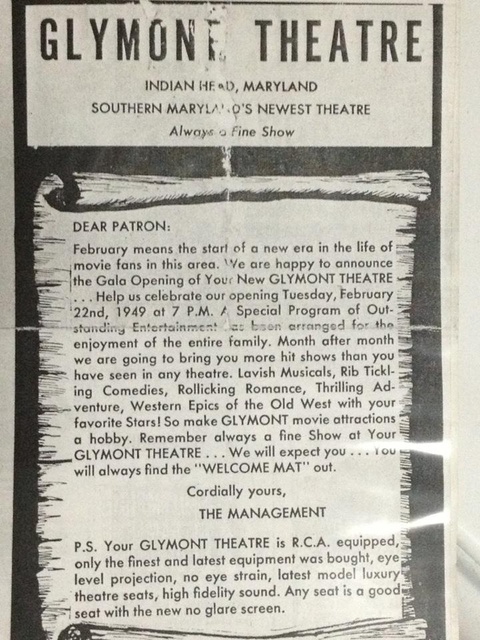 The Glymont Theatre was opened February 22, 1949. It was closed in September 1968 with Jerry Lewis in “Don’t Raise the Bridge, Lower the River”. It was demolished in 1974.

The Glymont Theatre was actually demolished in 1974, not 1968. Sadly, I watched from my General Smallwood Middle School classroom as the wrecking ball took it down. My mother tells me that I watched my first movie, Mary Poppins, as a three year old in the Glymont Theatre.

BoodyBoy……You are absolutely correct on the date of the demolition, 1974. I confirmed that with the company that tore it down. I would love to have pictures of that event. Thanks for making me do a little more research.

My father, Arlo Adams, leased and managed the theater at the time of it’s closing in 1968, not 1974. I was the projectionist at the time. As stated above it was demolished shortly thereafter in order to make room for the widening/dualization of Route 210. The owners, Southern Maryland Oil, then constructed a new Texaco gas station which opened in early 1969 and was operated by Mitch Mills for many years until it too was demolished and yet another new building was constructed converting the property into its present configuration as a Dash-In convenience store. Southern Maryland Oil, which is now The Wills Group, still owns and operates the location as a franchise operation of its subsidiary, Dash In Food Stores. I admittedly have a unique perspective on these events as I worked for both the theater itself at the time of its closing and later Southern Maryland Oil (The Wills Group) from which I retired in 2010.

There was a drive in on 210 outside the beltway. I worked there briefly as a relief projectionist in 1970. Do you know the name ??

There were 2 ABC was closes to City on 210 and Sky Chief was at / near intersection of 210 & Old Livingston Road.

I’m not sure which one I worked at – I think it was the Sky Chief. It had a monster projection booth with water cooled arc lamps and a water jacket around the gate to keep the heat from melting the film. When you struck the arc, it felt like the whole neighborhood would dim down for a second……

Drive-in arcs were beasts! Often 300-500 amps versus 200 for a conventional theater. Just wondering were you union? I also worked as a relief projectionist while in college in the late 60’s/early 70’s but could never get in the union. Somebody had to die back in those days. Got to work some really interesting venues though including RKO Keith’s, Warner, and the Uptown.

I did relief work with the union (local 224) for four years(65-69)while I was in the Air Force. I kept busy because I was willing to work anywhere – including the porn houses and art houses; places many of the FT guys' wives objected to. I wound up working many of the theaters in the area that no longer exist. The drive-ins are all paved over. If you were an archeologist from another planet you could find no solid evidence that any of these drive-ins ever existed. You can go to the AFI in Silver Spring and see a couple of Simplex with little 50Amp Peerless Arc’s in the lobby.

Been to the Super Chief. They had 70mm I believe. Saw Lord Jim there. Was thrown out because my friends and I kept running in front of the booth and making finger shadows. I was a projectionist at the NAS Anacostia for 4 yrs. Always old movies because Bolling AFB next door had a real theatre. Our theatre was also a gym with wooden seats. I worked there 1960-1961 and 1964-1966. Also worked as a projectionist at the Naval Photographic Center, same time frame.