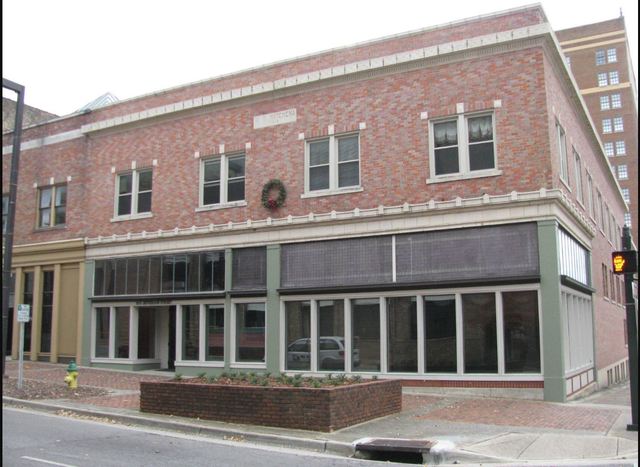 The Jefferson Theatre opened on June 26, 1916 with Louise Lovely in “The Gilded Spider”. It seated 600 and was closed as a silent movie theatre in January of 1930. Equipped for sound by new operators it reopened as the Roxy Theatre on February 12, 1931 with George Sidney in “The Cohens & Kelly’s in Africa”. It was short lived and closed on May 7, 1932 with Jack Holt in “Behind the Mask”. The site is now a parking lot. It was taken over for retail use by Becker’s Store.

The Jefferson Theater was built in 1916 and lasted until 1932. Was the middle section of the W.T.Hutchens Building in Huntsville, Alabama. Building still stands.

The town’s second Jefferson Theatre opened by C.L. Hackworth on June 26, 1916 with Louise Lovely in “The Gilded Spider.” Opening day patrons were impressed with the pipe organ and orchestra along with the gold fibre screen. As theatres equipped for sound, the Jefferson was left behind. The Jefferson went out of business showing silent exploitation films in January of 1930.

The operators of the Lyric, Lyric Amusement Circuit, took on the location wiring it for sound and relaunching there as the Roxy Theatre on February 12, 1931 with “The Cohens and Kellys in Africa.” The Roxy failed about a year later closing on May 7, 1932 with Jack Holt in “Behind the Mask.” Becker’s Store leveled the floor opening there September 26, 1932.