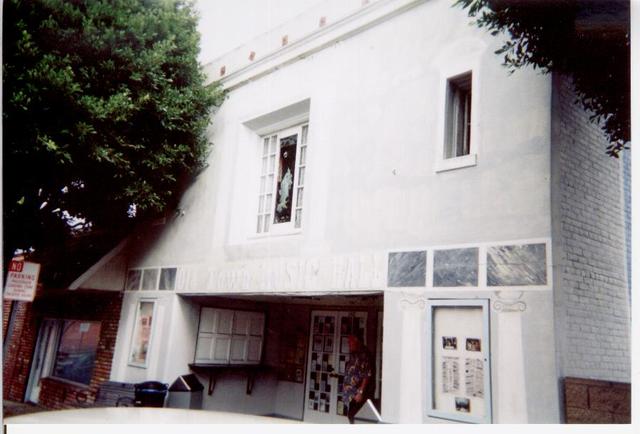 Located in El Segundo, to the immediate south of Los Angeles International Airport. Plans were drawn by architect Edward Leodore Mayberry Jr. for operator E.L. McMurry, but he did not get the contract. The architects for the State Theatre were John P. Krempel & Walter E. Erkes who had offices in the Bradbury Building on Broadway, Downtown, Los Angeles. The 350-seat State Theatre was opened around 1922. It was closed in the mid-1930’s and remained closed until 1944, when it reopened as the El Segundo Theatre. It was renamed State Theatre again in 1951.

Bill Coffman and Bill Field installed a mighty Wurlitzer organ in the old State Theatre in 1968. They had previously purchased the organ from the Fox West Coast Theatre, Long Beach in 1960 but used it at another location. Soon the former theatre, built in 1921 and always listed in movie guides as an independent, became known as Old Town Music Hall presenting concerts and accompaniment to silent films.

Bill Coffman passed away in December of 2001, but Bill Field with the help of volunteers is carrying on the Music Hall’s tradition, attracting a whole new generation of classic film and music enthusiasts.

The Old Town Music Hall is open Friday to Sunday, presenting classic films (both silent and ‘talkies’), and concerts of early jazz, ragtime and popular music of yesteryear. All silent films are accompanied live on the ‘Mighty Wurlitzer’ theatre pipe organ. Theatre rentals are available for private screenings and events. Old Town Music Hall is a 501©(3) non-profit organization. Bill Field passed away on June 28, 2020 while the Old Town Music Hall was closed due to restrictions caused by the Covid-19 pandemic. It reopened in the summer of 2021.

There’s a typo in the middle paragraph in my comment above. The Boxoffice item cited was in the August 19, 1944, issue.

The name State Theatre was restored to this house in 1951, according to the July 28 issue of Boxoffice that year.

There was a Showcase Cinema in Downey, CA operating in 1968; perhaps Boxoffice misidentifed the location?

Here is the State Theater in 1955, with the Douglas Mortuary next door.
http://tinyurl.com/28qrejx

El Seguno in the caption should be El Segundo, as an aka.

I love going to the Old Town Music Hall. When you turn on Richmond Street your car suddenly turns into a time machine that brings you back to the 20’s and 30’s. When you walk into the theater you forget that it is 2010. There is nothing like watching a silent movie and hearing the awesome sound of the Mighty Wurlitzer. Where else would you walk outside of the theatre to buy macaroons at the concession stand during intermission? The best and most unique music concerts are there on Sundays. I truly believe that you could find no other place like this on earth.

Certainly my favorite theatre to visit. Those in attendance are always respectful of the great theater, and it is an absolutely enjoyable atmosphere. The staff loves what they do, and the films are top-notch silent pictures, and the accompanying musicians play beautifully. On my first visit, nearly a decade ago, I saw some Laurel & Hardy pictures that were shown from quality film prints. I love to return and see films here whenever I can. El Segundo is a wonderful city…

I just visited this theatre to see “The Great Victor Herbert.” The organ concert before the movie and during the silent comedy was outstanding. I was disappointed that the movie was a DVD, and the quality was poor. There was no contrast in the picture. Blacks were light gray. And the sound and picture were out of sync. I was hoping for a 35mm print, but it didn’t happen. At the end, the letters DVD appeared on the screen.

This building was seen(outside and inside) in an episode of Storage Wars(My little Brony).

Recent research suggests the architect of this theater was not Edward Leodore Mayberry, Jr., as suggested in the above comment in 2010. In further researching Southwest Builder and Contractor, Mayberry did draw plans for E. L. McMurry for a brick theater in El Segundo. However, if you keep looking, there is a subsequent entry indicating a few months later Architects John P. Krempel and Walter E. Erkes with offices at 538 Bradbury Bldg were drawing plans for Mr McMurry’s El Segundo theater. The listed description and dimensions from this second entry are more consistent with the current theater. Mayberry’s design was for a much larger theater with seating up to 500 and was part two-story to accommodate the extra seating.

This research does not establish John P. Krempel and/or Walter E. Erkes as the architects of the theater still standing today at 140 Richmond Street, El Segundo, CA. This only indicates a set of architectural plans were to be prepared by this second firm for a theater in El Segundo that is of the approximate size of the current structure. Not being able to identify any other brick theaters built around this time in El Segundo, I feel comfortable stating it is LIKELY that this theater may have been designed by the architects Krempel & Erkes.

The information from the below two listings in Southwest builder and contractor was shared with the theater management prior to posting here.