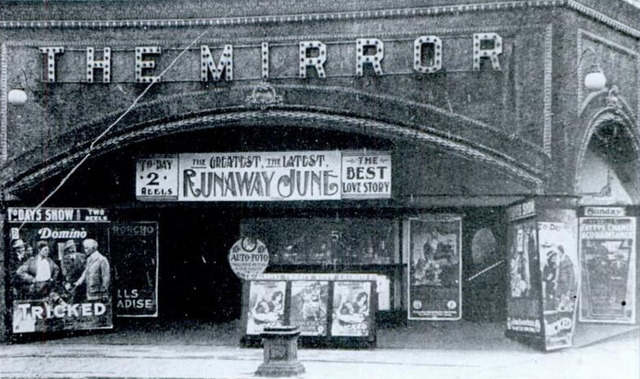 The Mirror Theatre was opened on December 17, 1910. It seated 750 and was destroyed by fire on the early morning of December 18, 1927. The final movie to be played the previous evening was Pauline Starke & Ben Lyon in “Dance Magic”.

This item appeared in the January 14, 1911, issue of The Moving Picture World:

“Moline’s new picture house, at Sixth avenue and Fifteenth street, has been named The Mirror, a prize of $5 has been awarded to Miss Bernice Oppenheimer, in a contest. A mirror screen is a feature.”

“Runaway June” which is advertised on a banner in the vintage photo of the Mirror was a serial released in 1915. The Domino Film Company’s short “Tricked” was also a 1915 release.

The end of Brotman’s Mirror Theatre was reported in the January 7, 1928, issue of Motion Picture News:

“The Mirror Theatre at Moline, Illinois, owned by I. Brotman and Son, was totally destroyed by fire last week. Whether or not the house will be rebuilt is as yet undetermined.”

As it turned out, the house was not rebuilt. The building on the site now was built instead, and originally housed a Montgomery Ward department store.

1912 photo added courtesy of the Retro Quad Cities Facebook page. Mirror Theatre at the end of the street. 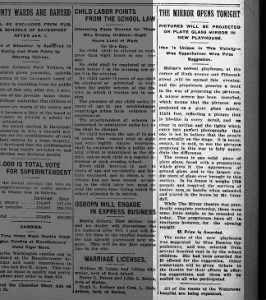 The Mirror Theatre launched December 17, 1910 with movies shown on a giant 1,700 pound plate glass mirror measuring 11'x14'. The theatre was operated by George “Daddy” Diehl who would open the Orpheum and a Mr. Crandall.

The final screening was “Dance Magic” with Pauline Starke and Ben Lyon on December 17, 1927 – the theatre’s 17th anniversary. The Mirror’s entire interior was destroyed by fire early the next morning, December 18, 1927. A year later, architectural plans were submitted to built a replacement theatre. Those were scrapped in favor of a location for a new Montgomery Ward store.