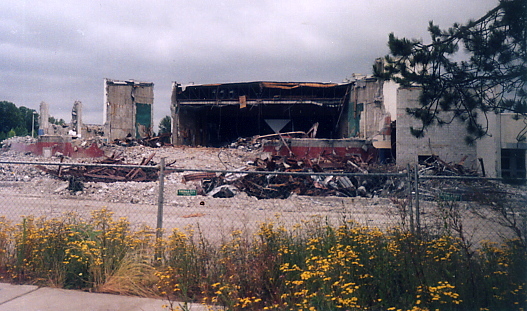 Located in Tukwila, to the south of Seattle, and close to Seattle Airport. Opened on November 20, 1956 with Audrey Hepburn in “War and Peace”. The theatre was part of an entertainment complex that had a 32 lane bowling alley and café. The theatre appears to have been one screen originally with its balcony divided into two auditoriums of maybe 300 seats each. The main auditorium still has maybe 1,000 seats or more. An additional hallway with four auditoriums, two approximately 400 seats and two approximately 200 seats, was later added. The main auditorium(#1) has murals by decorator Anthony B. Heinsbergen, depicting Lewis, Clark, and Native Americans filling the side walls.

Currently, it is fairly well kept up even though its business is slow. It was one of the first I know of in the area to advertise SDDS sound. It had a huge parking lot that is now being made into airport parking.

An interesting note is that a former major highway, Military Road, ends in the theatre’s parking lot due to the re-routing of the road with the construction of a section of freeway adjacent to the theatre probably in the 1970’s.

The Lewis and Clark Theatre was closed by Cineplex-Odeon in January of 2004, and briefly served as a church until the auditorium and bowling alley were demolished in 2005. The former lobby is used by a car rental company.

My dad, Allet Pippenger, was the Manager of the Lewis & Clark Theater during the 50/60’s (and also helped paint the murals inside), and then went on to the Music Box in Seattle. I believe he also worked at the Northgate Theater in the beginning. We use to go to work with him on some days, and would keep busy while he was getting the day at work ready. Our family were friends with Bob & Claudia Bond (former manager). Those were the days - wow!

I’m sad that the building was torn down and wish it had somehow been kept as the original auditorium, with the balcony upstairs, etc. The horse’s head at the top of the runway was very cool. We would roll down the ramps, ride a prize bike before the owner won it, hear about how the Seattle Symphony came out to play, but as time went by a lot of changes were made before it was destroyed.

Those were the hay-days! My sister and I worked there for about two years in the ‘70’s as “popcorn makers”, and sold tickets in that tiny box office. Tickets were cheap! You can’t imagine how it was with lots of customers standing in line for snacks and tickets, etc. Our father died in 1970, but the former management knew us and hired us at the time because of him. So many movies played that I couldn’t even begin to start. It was a great day back then!

@seraphina: Any relation to Flora who worked there in the mid-70’s when I was there? I remember her well along with the twins Laura and Lana? And much of the rest of the gang too. Yes, it was a great place for a HS kid to work back then.

I worked at Lewis and Clark Theater from about 1963 to 1967 (high school and college). I used to babysit for you, Seraphina, Flora and your little brother (who was still in diapers). Not sure if you’d remember or not, but, my sister, Julie (Rulo) was a friend of Flora’s. I really enjoyed working at the theater and really appreciated your Dad giving me a job. I worked most of the time in the Box Office, out in the middle of the concourse. Is your Mom still around? She was a sweet lady, as I remember her.

Is the bowling alley still there? Is there anything on the former auditoriom site now?

Only the lobby section remains, auditorium and the bowling alley both demolished.

Oh, was the bowling alley, bowled over at the same time as the auditorium then?

Cathe, Yes - I at least remember Julie living across the street! It was such a magical place to work at, and the jobs that we did at Lewis & Clark. I worked for a little over two years there in my teen years. Yes, our mom is still alive! She is in California living with my brother, Allet. Dad had a lot going for him, up to the end when he passed away.

mikeb99, Yes - Flora is my sister. Both of us had such a wonderful time working at the Theater. I think I do remember Laura, not positive though. So many memories there!

Yes, I remember your Dad very well and you kids, too, since I babysat for at least a year for you guys. When I turned 16, your Dad offered me a job at Lewis and Clark, so, someone else babysat you guys after that. I remember your house was decorated so nice with a baby grand. Allet was just a baby. I was sorry to hear when your Dad passed. He had a lot of potential. Flora might remember me, or at least Julie. I saw Flora at a party my sister had when my children were little. Say hello to your Mom for me, I think she worked for Boeing? (Cathy Rulo) ♥

Yes, mom worked at Boeing as a secretary. I will tell her hello from you! Dad did have a lot of artistic talent too, and left many memories. Flora told me that she worked for the SRO theater several years in the office in Bellevue (after the theater). It’s really nice to exchange these memories with you!

Someone has posted on YouTube: https://www.youtube.com/watch?v=tWmCwcbcQmA a Washington State Department of Transportation video of a drive on Highway 99 shot on June 7th of 1983. The massive free standing marquis of the Lewis and Clark comes into view at 23:24. This was shot soon after the addition with 4 new screens was added to the original 3 screen and bowling alley complex.