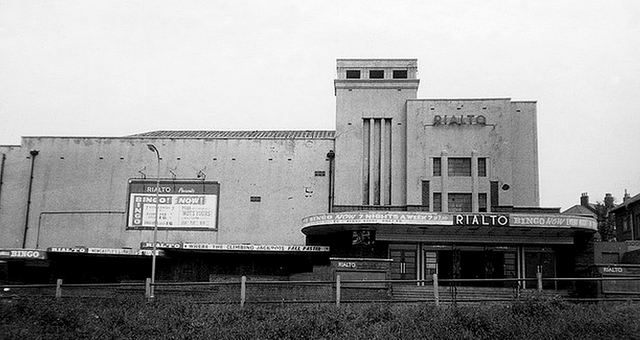 Located in the west Newcastle district of Benwell. The Rialto Cinema was opened on 19th May 1937 with Shirley Temple in “Dimples”. It was built for and operated by the E.J. Hinge Circuit of Grey Street, Newcastle upon Tyne. Seating was provided for 668 in the stalls and 358 in the circle.

KYB 1942 is more forthcoming with the following information: 1,050 seats; a 26ft wide proscenium onto a 20ft deep stage that was 50ft wide; and there were 5 dressing rooms. The Hinge Circuit’s office had moved to Northumberland Street in Newcastle.

Photographs show that the building was on bingo in 1963. Current (2014) Google Earth views shows the area much cleared/demolished.

The Rialto opened 10 May 1937 and was similar in design to the E J Hinge Circuit’s Ritz Cinema in Forest Hall. The architects were Percy L Browne, Son and Harding. The façade was brick and coloured cement with a tower and metal canopies. The entrance vestibule contained the pay-box beyond which was a foyer. The auditorium was decorated in red, beige and gold and had 1026 seats (according to a non-KYB source). The proscenium arch was enhanced with decorative plasterwork. The Rialto closed on 25 June 1961 and became a bingo hall. It was demolished in July 1964 and the site is now occupied by a health centre.