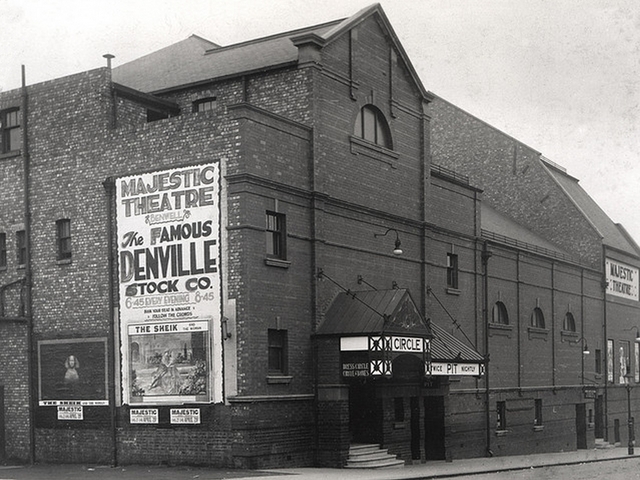 The Majestic Theatre opened on 23rd October 1927 as a live theatre with the comedy revue “Off the Dole”. The owner, John Grantham, also owned the Grand Cinema Palace across the road. The architects were Dixon and Bell. It was built with projection facilities, and these came into use from June 1930 when it became a cinema.

The theatre was a long rectangular brick building with its main entrance on Condercum Road. The façade was of Classical form, with horizontal bands of rusticated faux masonry in rendered brick. There was a fly tower with a pitched roof. The street frontage was subdivided by vertical bands of brickwork. Most windows were round-headed. The grandest of three entrance doors, to the circle, sat below a double-pitch roofed porch. The doors were of panelled bronze decorated with classical Greek actors' masks. The adjacent doors, to the pit, had a mono-pitch porch. There were exit doors for the circle and doors to the stalls. Inside, the theatre was decorated in a florid Classical style in a luxurious deep red, gold and black colour scheme. It had a vaulted ceiling and gilded ornamentation on the proscenium arch. Ornately decorated stairs led from entrance hall to the circle.

The first Kinematograph Year Book mention is 1931. There is Western Electric sound, and the owners are the Benwell Theatre Co. Ltd. 167/9 Wardour Street, London, W1.

In KYB 1945 the listing becomes “Props Union Cinemas managed by Associated British Cinemas Ltd. 30 Golden Square, London, W1”. It remains that thereafter. KYB 1947 is the first to have any information about the cinema, giving the capacity as 1,142 which, oddly, rises to 1,144 in KYB 1954.

The Majestic Theatre was closed on 20th May 1961 and was converted into a bingo club.

Strictly speaking, the fly tower roof, having two pitches to it, was a mansard roof.

I’m intrigued by the box construction on the roof above the “Union Cinemas Majestic” sign in this 1937 shot. It isn’t there in the equivalent 1929 view.

A public services building with library, housing administration offices, etc is now on the site.

A couple of shots of the shuttered building in 1998 after bingo had closed, the building was demolished not too long after. This was a very ornate and attractive theatre in its day, located in the wrong suburb.

MAJESTIC BENWELL – note that the fly-tower has been reduced in height by now.

MAJESTIC BENWELL – The main entrance door were particularly notable, being metal with ornamental lion heads on each.