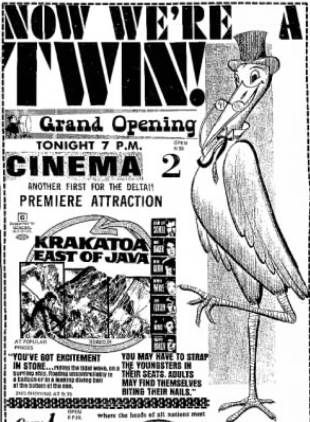 Opened on November 2, 1966 with Stephen Boyd in “Fantastic Voyage”. It was a single screen operated by Gulf States Theatres, Inc.

On November 26, 1969 it had 2 screens as it was taken over by Gulf International Cinema Corp.

1987 it was taken over by United Artists Theatre Circuit.

2014 as far as I know, it is the Grace Tabernacle Covenant Church.

More info, corrections, comments, photos, old and new, inside and out, are always welcome!