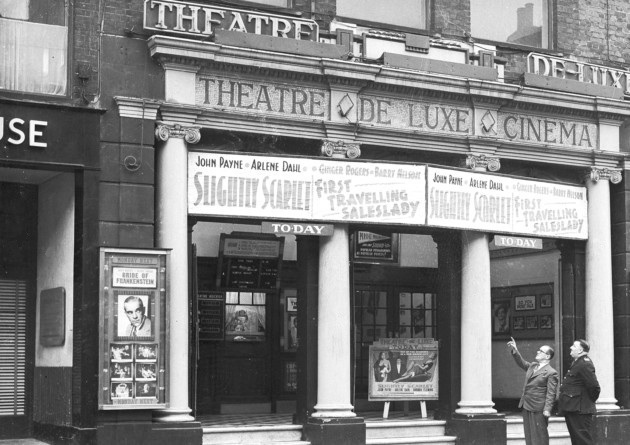 The Theatre de Luxe Cinema, in St Andrew’s Street, that had been left to rot after closing in 1957 and being smashed up by hooligans. Then, in June 1964, it made front page news when it was announced that Norwich City Council had bought the first real cinema in the city for £9,000. It was, said the council, needed for road improvements and redevelopment, so it also came tumbling down.

The cinema, known as the Theatre de Luxe Cinema or the ‘ranch house’ because of all the westerns it screened, was the first picture palace in the city, opening on 9th April 1910 with “Corsican’s Revenge” and “Generous Rivals”. It was operated by the Electric Theatres(1908) Ltd. chain. But that’s not the whole story.

In the early-1830s, the building first opened its doors to the public as the Royal Bazaar, the foundation stone being laid on 8th September 1831, the Coronation day of William IV. It went on to become the Lecture Hall which presented the first moving picture shows, Poole’s Diorama with sound effects. They were pictures of faraway places flickering on a screen with a chap at the back banging on a drum and blowing a bugle!

Then there were the more outrageous shows, starring the likes of Captain Bates, who was said to weigh 34 stones, and a Chinese giant called Chang who stood 9ft tall. And a massive Tyrolean Giantess who weighed 360 lbs.

She was so popular she returned to appear at the city’s much bigger Hippodrome Theatre.

In 1906 Michael Zacharewitsch, the Russian-born violinist, hailed by Tchaikovsky, appeared at the venue.

In 1910 the Victoria Hall became the Theatre de Luxe Cinema, and the people queued to watch the modern miracle of moving pictures. It was a place which always gave value for money. It was never a posh picture house but it had loyal and faithful customers.

Norwich people loved the old Theatre de Luxe Cinema – and in 1920 it was rebuilt again to increase the number of seats to 1,000. It was the last cinema in Norwich to be converted to talking pictures in 1931 but the first to screen 3D films in 1953.

But times were changing. The Theatre de Luxe Cinema was running out of customers and it closed in 1957. On the last night yobs ran wild and ripped the place apart. It was heartbreaking for the manager, Archie Gibbs, who had also been a gifted musician who had started his career in the cinema by playing in the orchestra pit.

It was left to decay until 50 years ago when it was bought by the council – and demolished. What was once a theatre of delights became a yard for the telephone exchange.