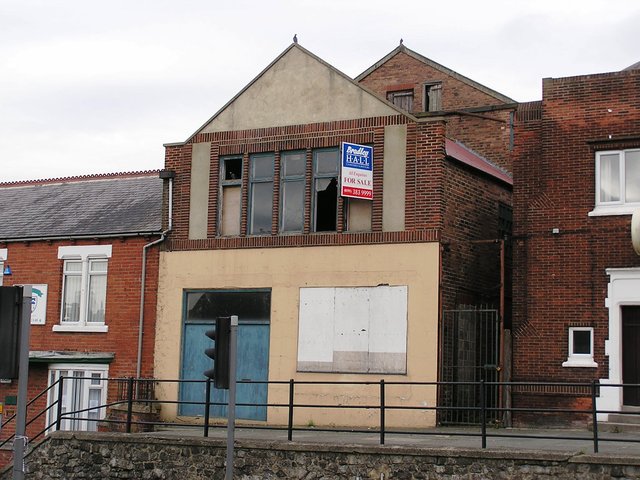 Located in Coxhoe, County Durham, just 3 miles southeast of Durham. The Avenue Cinema was opened on 12th March 1930 by the Iseton brothers. It was designed by architectural firm Hayes & Gray.

By the early-1960’s it was operating as a cinema, with part time bingo some nights in the week, and by 1965, films had ceased and it became a full time bingo club. Around 1969/1970, the bingo club closed. In October 1970 it was taken over by an independent operator and reopened as the New Avenue Cinema, but was closed at the end of summer 1971. The building was converted into offices, but by 2006 was vacant. Plans were proposed in mid-2014 to demolish the building.

Photo uploaded of The Avenue in happier days; I believe that it was taken on Coronation Day, 1953….

The return to cinema use lasted for less than a year. It reopened in October 1970 with the United Artists double bill, ‘For A Few Dollars More’ and ‘A Fistful Of Dollars’ and the cinema opened initially only on Thursday – Sunday. After a couple or so months it started operating 7 days per week which suggested to me, at least, that the returns must have been quite healthy. Obviously, such was not the case as The Avenue closed for the very last time at the end of the Summer holidays in 1971 following a two week run of ‘The Sound Of Music’.