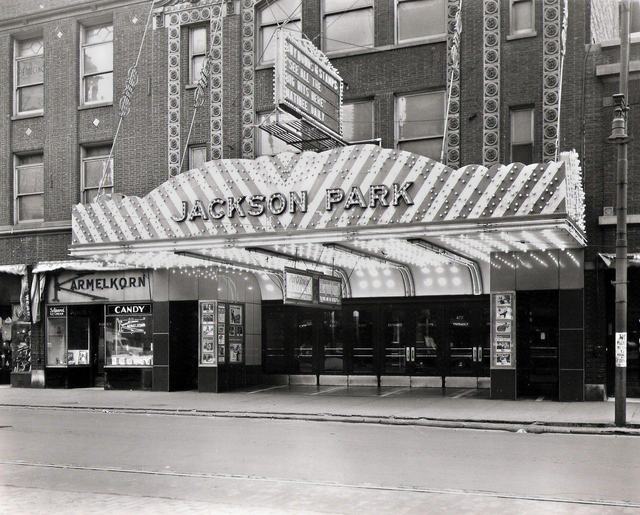 The Jackson Park Theatre was a nearly-1,500 seat theatre in the neighborhood of the same name (in fact, it stood just across from the large park for which both the neighborhood and theatre are named for, on S. Stony Island Avenue, at E. 67th Street.) The theatre opened November 29, 1916. Following a period of closure for renovations, it was re-opened on October 26, 1935

I believe this theater – for better or worse – had a tremendous national impact on the U.S. motion picture industry: the owners of the Jackson Park filed, and won, an anti-monopoly lawsuit against the major studios, which resulted in the 1948 Supreme Court ruling that ultimately forced the studios to divest themselves of the exhibition aspect – and sell their theaters – by 1953

You are absolutely correct — The Jackson Park lawsuit started the Federal government investigating Paramount Pictures and ALL their theatre operating partners. Thisled to the consent decree that required Paramount to reorganize and sell off a lot of their theatres. This is what ruined the motion picture industry for many years.

My late uncle Richard Salkin managed the Jackson Park most or all of his adult life. He was the manager when the famous Jackson Park case and decision were adjudicated. When I was a kid, the “JP” was our go-to family movie theatre, partly no doubt because we got in free. I remember seeing “Red River” with John Wayne and Montgomery Clift (1948, I would have been 8 years old); “Stage Door Canteen” (1943, very likely the first movie I ever saw); and National Velvet (1944, Elizabeth Taylor as a child star), to name just three. Whenever we went to the “JP,” we never failed to stop first for Karmelkorn next door.

I remember Mr. Salkin. My grandmother was the candy lady at Jackson Park until it closed. She then went to the Avalon, then the Capitol and finally to the Chicago Theater. As my mom says, I grew up in a movie theater. So many wonderful memories and adventures! I saw Hit the Deck 21 times. Mr. Salkin gave me a autographed picture of one of it’s stars, Ann Miller. When the Mummy played, they had a guy dressed up like the mummy walking the aisle. It still creeps me out.

Here is a photo of the Jackson Park. It strongly resembled the Portage.

Several other photos can be found there through search.

This opened on November 29th, 1916. Grand opening ad in the photo section

Erected by Edward I. Bloom. Initially booked by Ascher Bros. The Jackson Park gained a reputation for music starting in 1918, when Leo B. Salkin replaced W.P. Clement as manager (Clement went on to build the Stratford). (Moving Picture World, April 17, 1920). Starting in 1922, Salkin also managed the Kenwood. Renovated in 1936 (pictured above). Bloom would later build the Shore theater.