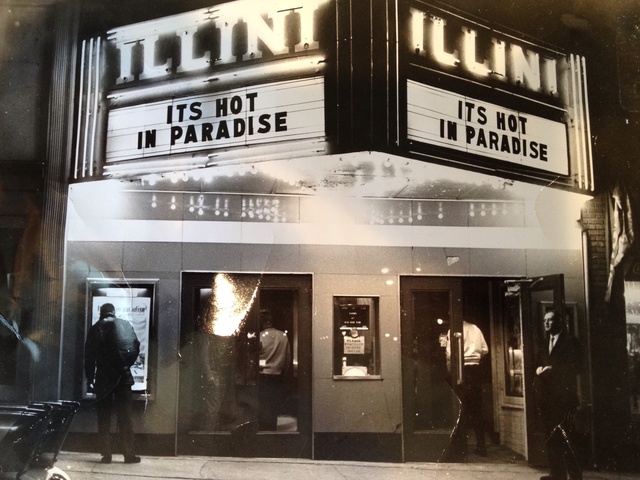 Opened in 1906, the Varsity Theater was the first nickelodeon in operation in Champaign. In the late-1920’s, it began showing sound films.

In 1943, the Varsity Theater was extensively remodeled (and renamed the Rex Theater), as a 330-seat Art Moderne style theater. It featured new projection equipment, new leather seating, air-conditioning and a cream and blue color scheme in the auditorium. The Rex Theater was advertised as “completely fireproof” when it reopened with the Sonia Henie film “Iceland”.

In 1948, the theater received another new name, the Illini Theater. A decade later, the Illini Theater was, along with the Park Theater (now the recently shuttered New Art), acquired by the Art Theatre Guild, which began a policy of art and foreign fare at both theaters.

The Illini Theater was shuttered in 1983, after nearly fifteen years as an adult theater. Four years later, the Illini Theater was purchased by a church, and it continued to serve in this capacity until 1997, when the church moved out. Since then the building has been renovated and remodeled and operates as a bar, known as the Highdive Club, featuring live music.

Their website has some good virtual tours of the various interior spaces. The original ornate pressed-tin ceiling is still intact. It was a fairly long and narrow theater. The triangular marquee is still there, redecorated. The rest of the original decorations are all gone, all new elements and some bare brick. It’s quite a fancy place now.

Here is a photo circa 1960s:
http://tinyurl.com/cqhybk

Interesting photos.
I remember passing that sad little theater a few times in the 70s when I was in
grad school at the Uof I. Funny, in a year and a half, I only made it to downtown
Champaign two or three times.
Ken MC – thanks for the photo. Looking at those cars though, I’d say that one
was taken in the 50s, not the 60s.

This interesting video tells the history and shows rare photos of the Illini Theatre;
View link