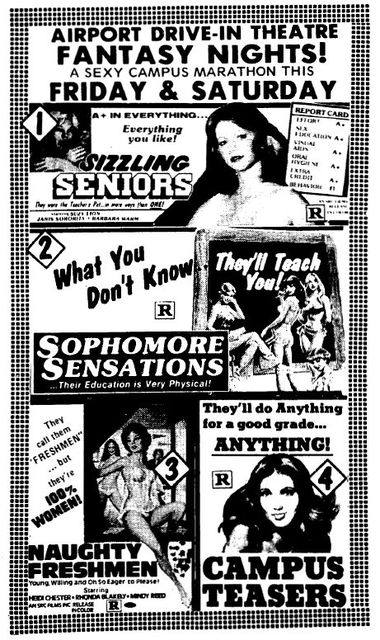 The Iris Drive-In opened on July 2, 1948, featuring the 1946 comedy ”A Night In Casablanca” with the Marx Brothers. It was built at cost of $75,000 with a 35 ft. x 47 ft. screen tower and a 500 car capacity. It was owned and operated by the Robert, Carl, Lee and George Sproule, dba the Sproule Theatre Circuit. They were also operating the State Theatre in Hutchinson. After the death of Robert Sproule in April of 1965, it was sold in May of 1966 to the Jay Wooten and Dennis Montee dba Farmington Drive-In Theater Association. The Farmington Corp. also owns the Ayr-Vu Drive-In and Southutch Drive-In. In July of 1972 Jay Wooten and Dennis Montee sold the Southutch Drive-In and the Iris Drive-In to Commonwealth Theatres. The Ayr-Vu Drive-In closed for good on July 31, 1972, to allow the property to be redeveloped.

On June 27, 1973, the Iris Drive-In reopened for the season as the Airport Drive-In. Over the years Commonwealth had problems showing “R” and “X” rated films at the Airport Drive-In. I believe it closed in 1982 and stood empty until 1989. The property was sold and the drive-in was demolished. The property was sold again and is now the home of the New Hope Baptist Church.