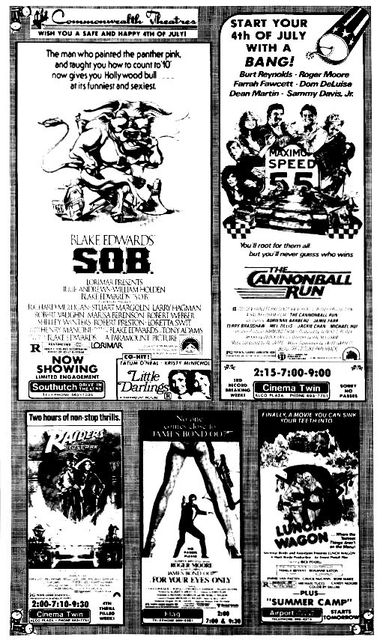 Located in South Hutchinson. The Southutch Drive-In opened on August 4, 1955, featuring the 1955 western “Strange Lady in Town” with Greer Garson and Dana Andrews. The second feature was the 1954 mystery “Black Widow” with Ginger Rogers and Van Heflin. The Southutch Drive-In was opened by Jay Wooten dba Farmington Drive-In Theater Association. Earlier in April of 1955, Jay Wooten and Fred Moden would buy stock in the Farmington Drive-In Theater Association and took control of the company. At that time they were operating the Ayr-Vu Drive-In also. The parking ramps held 625 cars. It also had a concrete patio in front of the concession stand with speakers and lawn chairs for the people tired of sitting in their cars. The air conditioned concession stand featured an outside fireplace for cooking charcoal broiled hamburgers.

In May of 1986, Commonwealth Theatres was sold to Cannon Group Inc., a Los Angeles-based film distribution firm. Commonwealth would retain its name and present management. It operated as a subsidiary of the Cannon Group. Commonwealth planned to add 70 new screens in operation by October. Unfortunately that did not include the Southutch Drive-In reopening up for the 1986 season. Commonwealth district manager Eldon Harwood was quoted as saying, “We’ve not been successful there the last couple of years due, in part, to the fact that drive-ins have become almost passé except in major metropolitan areas, and then only with first-run films.” I’m wondering if they ran first-run films in 1985, would it still open today instead of just an empty lot?

The address for this drive in is now South Hutchinson.

This is across from Tyson Foods. Some ramps are still visible as well as the perimeter around where the screen was located.