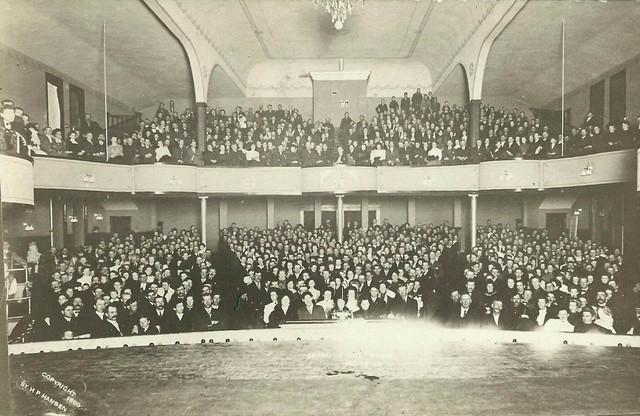 The Grand Opera House was opened December 16, 1909. It had a ballroom in the basement, which later became a roller skating rink. In February 1912, it went over to a program of vaudeville & movies. Later known as the Grand Theatre that closed in 1946. The building was then used by the American Legion Post as a club house. This closed in 1971 and the building was demolished to provide parking.

The February, 1912, issue of Motography said: “The opera house at Devils Lake has changed hands and will now be conducted as a motion picture and vaudeville house.”

It turns out that there were two theaters called the Opera House in Devils Lake, and the one that became the Grand Theatre was this one, which was located on Fifth Avenue and built in 1909. It was demolished in 1971. The 1913-1914 Cahn Guide lists the Grand Opera House as a ground-floor theater with 625 seats in the orchestra, 335 in the balcony, and 90 in the boxes and loge. A history of Devils Lake prepared for the national Bicentennial in 1976 (9.9mb pdf here) says this:

“…the Grand Opera House holds sentimental memories among Devils Lake citizens comparable to those of New Yorkers for the Metropolitan. Its gala opening night, December 16, 1909, featured a New York stage show, ‘Honeymoon Trail’, with a cast of 60 players, which was followed by a grand ball attended by about 200 couples.”

The theater featured a ballroom in its basement, which was later used as a roller skating rink. The history also notes the eventual fate of the Grand Theatre:

I’ve been unable to discover the exact address of the Grand Theatre, but it was on Fifth Avenue within a block of Fourth Street.

The earlier opera house was originally called Wineman’s Opera House, and was a second-floor theater with but 500 seats. The building, but not the theater, was expanded in 1916, going from the original two-story structure at the corner of Fourth Street and Fourth Avenue to the longer three-story building that survives today as the Opera House Apartments. I’ve found no evidence that Wineman’s Opera House was ever used as a movie theater.

I do now see one mistake in my previous comment. The Grand Opera House was on Fifth Street, not Fifth Avenue, and I believe I have identified its exact location. Part of the front wall with its base, face brick faux quoins, and a short length of stringcourse, is still standing, and can be seen in this Google Street View. The Opera House was on the south side of Fifth Street about midway between Third and Fourth Avenues.

An October 28, 1909, item in the Turtle Mountain Star said that the Devils Lake Opera House was scheduled to open on December 16. When the building was demolished in 1971, the main chandelier from the auditorium was salvaged and has since been installed in a building at Lake Region State College.

WOW a little hostile aren’t we.

I’m sorry if the comment comes across as hostile. The tone might be a bit curt, but it’s just a plain statement of the information I’ve come across, with no hostility intended (not even toward whoever it was at the State Historical Society who misidentified the 1913 photo of Masonic Hall. It was an understandable mistake, given the sign attached to the building.)

Nice work on locating the partial remains of the building, Joe. I was looking for “the movie theater” in Devil’s Lake as this is likely the theater where my late father saw the 1931 “Frankenstin” in its initial theatrical run. It appears that his family was living in Devil’s Lake at the time, from the 1930 census online. He told me how he had a long, creepy walk home in the dark after the show, and said, “I was looking around, whistling…”

According to the 1930 census, my mother, Louise Copenhaver, lived in an apartment at “318 W Fifth Street,” which I believe was the Grand Theater. She told of her and her sister getting into the movies because they knew their way around the building, and that there were dances in the ballroom. Her sister would catch the eye of players of brass instruments and then suck on a lemon, which caused them not to be able to play!