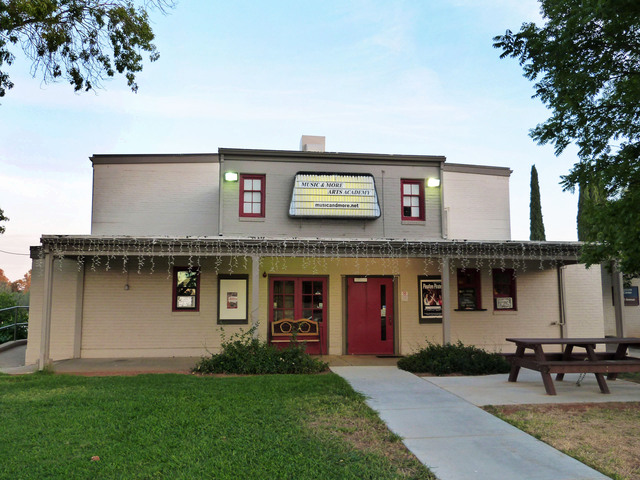 The Dewitt Theater was built by the U.S. Army in 1943 as part of Dewitt General Hospital to provide medical services to returning casualties from World War II. The complex served in that capacity from 1943 to 1945, with the post theater presenting current films as well as live USO shows featuring such performers as Bob Hope and Dorothy Lamour to both patients and hospital staff.

After the war, the hospital complex and theater were turned over to the State of California which operated the complex as a mental facility between 1946 and 1972. Movies and stage shows continued to be featured in the theater during this time.

From 1980 to 1998 the former post and hospital theater was known as the Dewitt Cinema, operated by Connie Burke and featuring second run films at discount prices.

Since 1998 the Dewitt Theater has been the home of Music and More Performing Arts which features music and arts classes for young children as well as regular live performances in the theater. Movies are also occasionally shown.

In 2015 the Dewitt Theater is scheduled for demolition, to be replaced by 42 spaces of a parking lot for a new Costco store. A grassroots community effort has been mounted to prevent the historic and fondly regarded theater’s destruction.

In February 2015 the Dewitt Theatre got a reprieve from demolition when Costco abruptly pulled out of it’s agreement to build a store on the Dewitt complex which includes the theatre. Costco’s pullout was reportedly at least in part in response to battles with proponents of keeping the theatre where it is.