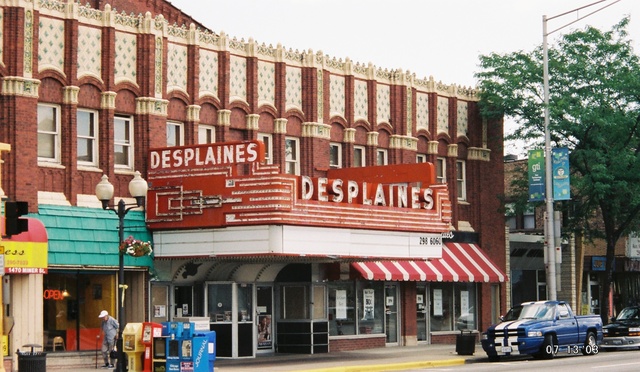 The Des Plaines Theater was opened as a vaudeville/movies house on August 9, 1925 with Adolphe Menjou in “Are Parents People” plus five acts of vaudeville on the stage. Built for the Polka Brothers circuit, the theatre was designed by architect William B. Betts of neighboring Park Ridge, who also designed the Glen Theatre (now the Glen Art Theatre) in west suburban Glen Ellyn among other theatres. The Spanish Moorish style foyer led into a Spanish Renaissance style auditorium, which originally seated 1,018 patrons and had a large stage and orchestra pit. The theatre was equipped with a 3 manual Geneva theatre organ which was installed in December 1925, and removed from the theatre in August 1934. The theatre’s exterior was in an Art Deco style, complete with bright, multi-colored terra cotta on the façade.

In 1935, members of the Balaban family (of the Balaban & Katz chain fame) purchased the Des Plaines Theater, and it became primarily a first-run movie house. That same year, the theatre was remodeled by the firm of Pereira & Pereira, adding some Art Deco style touches, especially to the marquee. In 1982, a fire nearly destroyed the theatre, but it was reopened a couple years later as a twin, with each auditorium seating about 275 patrons and screening second-run films.

The Des Plaines received a much-needed renovation in 1998, and showed primarily first-run East Indian films until closing in early-2003.

The Des Plaines Theater was again showing East Indian movies in 2006 and 2007, but was not been used since January 2008 when the theatre was used to for a special showing of “High School Musical 2” hosted by Radio Disney. It then re-opened as a performing arts venue, which also shows movies.

In October 2010, work began converting the theatre back to a single auditorium. Renovations were completed and the theatre re-opened on November 11, 2011. Seating is now provided for 700, with hopes of adding a further 250 seats in the near future. Programming live theatre, Bollywood movies, independent movies, and hopes of including Hollywood movies and film festivals.

The Des Plaines Theatre was closed in January 2014. Renovations began in November 2019 and were completed on October 1, 2021. It reopened on October 31, 2021 as a concert. live music venue with Kevin Costner & Modern West appearing. Seating is now provided for 958, with 824 in the orchestra and 134 in the balcony.

The Des Plaines city council is expected to lease the Des Plaines Theatre to Onesti Entertainment Corporation, which will book shows and operate a restaurant at the Des Plaines Theatre. Ron Onesti, the president of the company, said “I would consider it an honor and responsibility that I wouldn’t take lightly”. City officials began searching for a company to run the day-to-day operations of the theatre in July 2018 and interviewed three firms. The city council interviewed two of those companies and then authorized City Manager Mike Bartholomew to negotiate the lease agreement with Onesti, citing Onesti’s track record of success operating the Arcada Theatre in St. Charles as a reason for choosing his company as the finalist. Onesti also operates Rock ‘N Ravioli Restaurant and Music Hall and the Bourbon 'N Brass Speakeasy & Jazz Club in Evanston. “We were aligned on the vision of the theater,” Bartholomew said. “We want the theater to be an experience. We want people to go to the theater, no matter what the show is.”

Onesti will help the city decide the layout and design of the restaurant on second level, a bar concept on the first level and seating for anywhere between 600 to 900 people. The agreement stipulates the city will prepare the restaurant space to “vanilla box form” — meaning it will install electrical, drywall and a layer of paint. The cost of installing a kitchen, tables and chairs and all other aspects of the restaurant will be paid by Onesti. The city estimates construction could take between six and nine months.

Onesti pointed to the shows and the overall experience at the Arcada Theatre as a blueprint for what he envisions for Des Plaines. The Arcada books a wide variety of musical acts. “Everything is ambience-driven, themed and upscale,” Onesti said. “The experience is as important as the quality of food and the level of the cocktails.”

The city entered an agreement with Rivers Casino in May 2018 to buy the theatre, with the casino pledging up to $2 million to help purchase and renovate the building. The city completed the purchase of the building in June and has been completing improvements to the venue.

“The crew is hard at work this week removing the old marquee. We are looking forward to seeing the new signage shortly!”

The opening of the theater has been pushed back to October or later:

October 19, 2020 behind the scenes video tour of Des Plaines Theater by Ron Onesti. It appears that the comments were turned off.