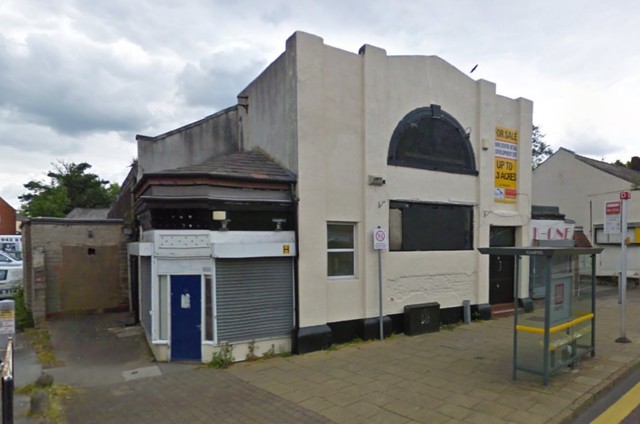 Located in Westhoughton, 4 miles southwest of Bolton, Lancashire. The Empire Cinema was opened prior to 1934 (possibly 1920’s). It was equipped with a British Thomson Houston(BTH) sound system, and by 1937 was part of the J.F. Emery circuit. It had a 37 feet wide proscenium.

The Empire Cinema was closed by the J.F. Emery Circuit in 1962. The building stands unused and available for redevelopment in 2014 and was demolished, apart from the right-hand side shop unit.

Note: Westhoughton is the birthplace of actor/film star Robert Shaw (“Jaws” etc), and the J.D. Wetherspoon chain of pubs opened a pub across the street from the Empire Cinema building in a former bank building, and named it ‘The Robert Shaw’.

It was still standing in July 2011 but had been demolished by May 2015. Homes could be built on the site

During the UK’s second, big TV snooker revival, when both Tony Knowles and John Spencer had successful halls in the Bolton area, this ex-cinema found its second use. Refurbished and rigged out with 15 modern tables, it was a reasonably successful Snooker Club until the fad faded. The fixtures and fittings were then sold off and the premises stood empty for several years. The small shops, either side of the facade, continued in business as a pizza/kebab shop and gent’s barbers, respectively. In 2014 the building was purchased by Hindley based developers, Littler & Associates. It was then demolished and plans submitted for a small housing development. The application was refused. A modified plan was then submitted, which addressed the previous objections, but this application, too, was refused. During most this time, the shop premises to the immediate right of the site had operated, under various names, as Westhoughton’s main Off Licence drinks retailer. This closed, due to competition from a discount outlet nearby, and then became a pet shop. The pet shop then gave way to a continental style bar; ‘The Beer School.’ This did good business until hit by the 2020 Covid 19 pandemic regulations. Being only a small premises, with little more than standing room, it faced closure for the duration, unless it could come up with a way around the regulations. So in the summer of 2020 the adjacent derelict cinema site was outfitted as a beer garden. With rough tables and benches knocked up from old pallets, it did booming trade during the summer months.