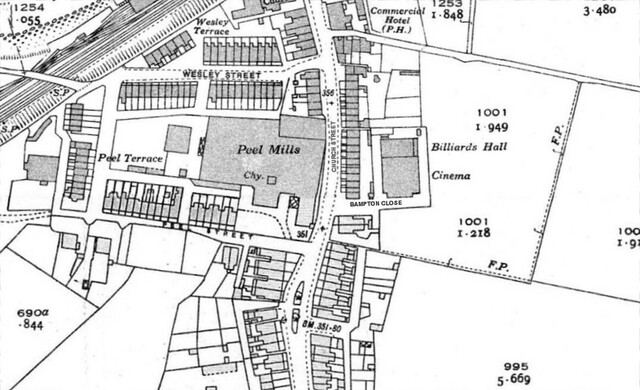 Located in Westhoughton, 4 miles southwest of Bolton, Lancashire. The Palace Cinema was a conversion of the Westhaughton Skating Rink which was built in 1908. In 1914 it was listed with a seating capacity for 1,000 with a 28 feet wide proscenium and a small stage. Equipped with a Western Electric(WE) sound system around 1930, it was taken over by the Marks Circuit Cinemas Ltd. and the seating capacity was reduced to 800. It had a billiard hall attached. By the 1950’s the seating capacity had been reduced to 656, and the Palace Cinema was closed in the late-1950’s.

Located just off Church Street, behind a row of terraced houses, no-one in Westhoughton ever called this cinema ‘The Palace.’ It always remained known, until closure, as ‘The Rink.’ Originally run by the Walker family, Mr. Walker doubled as manager and projectionist. His wife sold the tickets and doubled as usherette. The billiard hall was upstairs, over the auditorium. Players regularly walked down the aisle, during shows and carrying their cue-cases, to reach the stairs via a door next to the stage. It is said that it was common to hear the sound of rolling balls and pacing feet over the film sound-track. Following closure, the premises was gutted and became a wood-yard and sawmill for many years, before being cleared for housing.