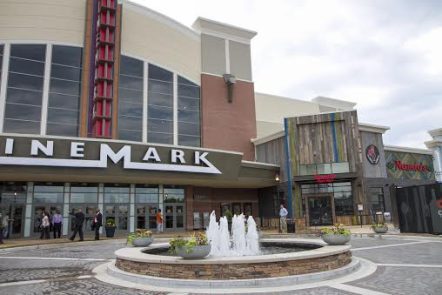 The 15-screen multiplex will anchor the new $85 million Towson Square entertainment center developed by the Cordish Companies and Heritage Properties on Joppa Road, just east of the Towson circle, and has eight new restaurants in the works. Not only does this represent Cinemark’s 30th anniversary, but it also represents Towson’s first commercial cineplex since the ill-fated Towson Commons 8.

The state-of-the-art Cinemark project offers four smaller, 150 to 160-seat theatres for indie, art house and foreign films, more mid-size and larger theaters, and also includes a 70-foot, floor-to-ceiling, 2D and 3D auditorium for summer and holiday blockbusters (Extreme Digital Cinema). There should be about 3,000 total seats in the theatre, if not more.

Downtown Towson has seen more than $800 million in recent private investment, including 2,600 apartments and townhomes, according to a county press release, new corporate headquarters, an expansion of the luxury shopping wing at Towson Town Center, and coming Towson Row project.

Included among the dining fare is a self-service, cafeteria-style option, complete with state-of-the-art butter stations (which has us really excited).

Theatre 14 is the large-format XD auditorium on the main level and Theatre D is the XD balcony on the Reserve Level.

Like the XD auditorium in its sister theatre (Cinemark Egyptian 24), there are height surrounds on the walls and overhead surrounds in the ceiling. According to Cinemark’s press release, there are over 60 speakers in this auditorium. The XD screen looks slightly larger than the Egyptian’s XD screen. No policy trailers were shown during the XD screening of Dawn of the Planet of the Apes, just the FirstLook preshow and film trailers. The Cinemark cell phone policy trailer and XD trailer were not shown after the film trailers/before the feature film.

Looks like they’re only doing reserved seating on the upper Reserve level balconies (VIP admission) starting this weekend. Auditoriums on the main level (standard admission) will switch to open seating.

It looks like the XD screen is Auro-capable. I asked the manager on the phone if an Auro system was installed, he said it was ready, but it wasn’t configured yet. When I caught the XD matinee of Lucy today, the sound had some depth to it, more so than traditional 5.1. Given that Lucy was mixed in Auro 11.1, the 11.1 track played. I noticed an added dimension of height at some moments, perhaps because I was expecting 5.1 to be played back. So it could be Auro or my mind playing tricks.

Sound system on the XD screen was really dense and really good. Barco projection was bright although there was no proper masking as expected in XD. Show playlist was FirstLook preshow, XD logo, film trailers, movie.

I saw Hercules late last month in one of the standard auditoriums. It was a mid-sized auditorium (no Reserve level balcony). Although the screen is quite large (practically ceiling to floor and wall to wall), there is no masking. The scope ratio of the film and trailers were letterboxed on the screen. Unlike the Cinemark Egyptian, no policy trailers were shown, just the trailers and the feature film. I think they should show the cell phone policy trailer, especially during weekends and holidays.

at one point Cinemark made the announcement back in 2014 that Barco Laser3D systems were to be installed on it’s XD (and I’d assume Xtreme [Fairfax 14]) screens – is this the case?