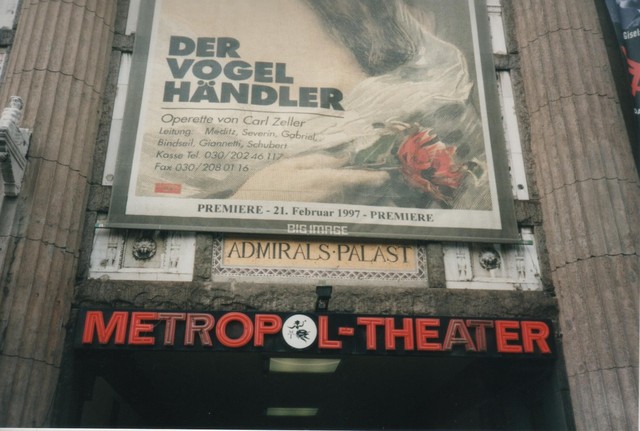 Located in the central east Berlin district of Mitte. The Admirals-Palast building was built as a multi-entertainment centre in 1911. It contained a 390-seat cinema, cafes, bowling alley, luxury sauna and steam baths a bowling alley and an ice rink. Designed in a splendid Beaux-Arts style by architect Heinrich Schweitzer, the main façade on Freidrichstrasse contained some of the rooms open to the public. There is a archway to the right of the building which leads to a large open courtyard where the main bulk of the complex is situated.

In 1922, the current Admirals-Palast Theatre was created inside what was the former ice-rink. It was designed by architects Oskar Kaufmann and Richard Wolffenstein. It seated 1,065 and had two balconies, and was used mainly as a variety theatre although there was some film use. In 1930 the same two architects plus Max Ackermann remodelled the theatre to seat 2,200, creating a new proscenium and décor in an ‘Expressionist’ style. In 1939/1940, the auditorium was altered again, to the plans of architect Paul Baumgarten, who gave it a Neo-Classical style which is still visible today. The seating capacity has now been reduced to 1,450.

The Admirals-Palast was re-named Metropol Theater during the Communist era when they occupied East Berlin. When Berlin was re-unified, the Metropole Theater found itself a victim of the ‘total’ city having too many live theatres, and was often more times dark, than in use. It ban to be used for cabaret performances, and in recent years it has been re-named Admirals-Palast again.