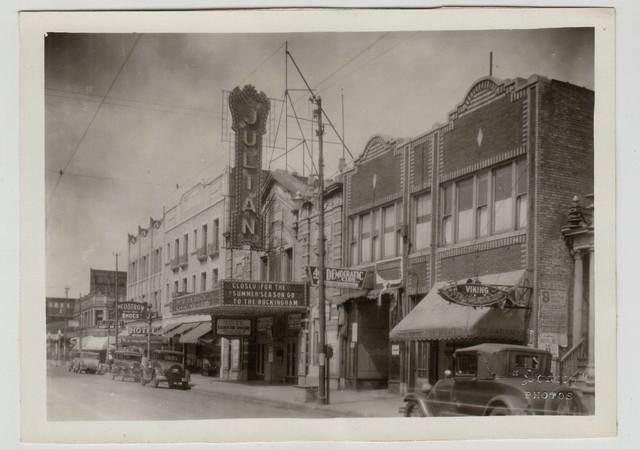 The Julian Theater opened on May 15, 1909, in the Lakeview neighborhood, not far from the Belmont Avenue El station, and sat 799. Originally, it featured vaudeville and other live stage entertainment during its early years, in addition to motion pictures.

The former Julian Theater was demolished in spring of 2005.

Here are my photos of this theater.

Chicago’s home of Scandinavian talking pictures, the Julian Theater, 918 Belmont av., which has been closed for several months because the war in Europe caused almost complete cancellation of films, has succeeded in obtaining a new Adolf Jahr feature which might be the last to be seen on the screen of the North Side cinema until the events overseas are cleared. The latest importation, “Only a Trumpeter,” will reopoen the Julian on Saturday, September 14.

I am from this neighborhood, lived in this area from 1946 to 1970 with many visits afterwards. It had a large Swedish population (aprox 10 to 20%) back then. A Swedish social club nearby, with a large pool, opened to the public. And some Swedish restaurants also. Us kids used to go there on Saturday for the matinee. Cartoons, Serials (from the 30s), Westerns etc. We would sneak our guns inside. It was a mad house.

This article features a very early photo and description of the Julian, as well as descriptions of the other theaters in the immediate neighborhood in 1911, most of which do not have entries on Cinema Treasures.

This page features ornament from the Julian.

LakeView Historical Chronicles link covering the Julian and others.

1967 photo of the Julian as a church upper right. Flickr image will enlarge within link.

Julian Theater is the third building down on the left in this December 1988 Flickr image.
Enlargeable within link.

The Julian was built for manager J. G. Conderman, who had previously owned a company that produced 40 foot ferris wheels for amusement parks. https://archive.org/details/ShowWorldv4n19/page/27/mode/1up?view=theater