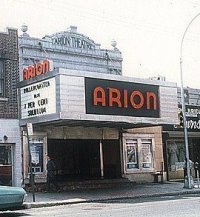 Located in the Middle Village area, this theatre was the first in Queens to be wired for sound and played “The Jazz Singer”. It spent a lifetime playing double features for low prices, along with kiddie matinees, midnight shows and revivals.

It closed in the mid-1980’s amid plans to turn it into a triplex, which never happened. It became a RiteAid drugstore, which was closed in March 2009.

We lived on 74th Street right down from the Arion. My parents, my brother and I would go to the theater every Saturday and Sunday evening. I’m 74 now and In can still remember the sights and smells of the Arion—that funny stale air-conditioned smell; the candy booth in the rear (Raisinettes, Jujubes); the matron who got to know us; the ticket seller who also knew us (we were such regulars that she kept charging my parents for two children’s tickets, even though we were way beyond the age.
During the summer, we would stop off at Grube’s Ice Cream Parlor. I would order ice cream, because Grube would give us a drink of ice-cold water. In the ‘40s, we had no ice, so ice-cold water was a super treat.
Across the street was the United Cigar Store, with Ben Hillowitz the owner
When I was in high school, I worked at Oscar’s a toy store that shared a building with the Thrift Pharmacy, run by the Saffron brothers. I worked from Thanksgiving to January and two weeks in the summer when the toys and games were delivered. I was paid $20 per week

Cut alot of classes at Grover Cleveland to go to the Arion back in the 70’s. Adults $1.00 Kids .50. Some days the projectionist would also run the snack bar. Would have to leave his post and run up the stairs whenever the projector would fail in the middle of the movie.

I remember the Arion with great affection, and I’m glad to see so many have equally-fond memories. I remember being a kid and seeing movies like “Tales From The Crypt”, “Night of the Living Dead” (orig. B&W – 1968 ?), “The Gang That Couldn’t Shoot Straight”, “Oliver”, heck, even “The Sound of Music”.

I remember being told by my parents to buy candy outside because it was a better value, but Milk Duds and other stuff just wasn’t the same unless you got it in those large “movie house boxes.” I remember going up to the counter and being served by a woman with short blond hair. She was also the ticket seller before the movie started. Everybody that I talk to about the Arion remembers her but can never tell me her name or if she even lived in Middle Village. She’s sort of a part of history without a name.

Talking about the candy counter, the popcorn in those huge tubs was also something that a lot of us looked forward to on a Saturday afternoon.

Another part of the Arion that I remember was the upper level. I’m a little fuzzy on this one so jump right in and set me straight. You walked past the candy counter (screen and seating on your right) and went toward a staircase and then walked left and up the stairs. Upstairs was the projection room and the bathrooms. Am I on-track here or am I in another theater? If anyone can fill in details, that would be great.

I’ve rambled on long enough, but I have one last thing to add: I remember being told that there was an apartment above the theater. I was told it was accessed by opening the door that was used to access the back of the movie-poster displays (the door fronted the street (Metro.)). Any truth to this, or was this just another way of pulling the wool over the eyes of a naive kid? LOL

Just found this site—great—the name of the lady who sold tickets and candy was “Rita Zakar” and she lived around the corner on 75th st on the hill. There was no upper level in the Arion. Do you remember the male matron inside who had a speech impediment who always told you to “PUDDA FOOT DOWN”

Wow! I hope some of you are still around because I just found this site and am absolutely ecstatic about the comments from Middle Villagers.

I have a website called mymvlc.com that is all about Middle Village with many stories, tons of pictures and updated on a daily basis.

I would love to have more information about the owner of United Cigar Stores, etc. etc.

Please go to the website and send me an email so we can communicate with one another.

I’m especially anxious to hear from revchuck because I lived 2 blocks away from that luncheonette and need more information about it. Likewise, for poe197, berternie, vacantlots and tomnacy (my mother was a friend of Rita Zakar and Rita has attended one (at least) of our annual Middle Village Reunions in Florida.

Can you use html code in comments? I’m trying it here.

revchuck – or any other members of the Hillowitz Family – I would appreciate your getting in touch with me to exchange information about Middle Village.

Sir, you’re the best! I’ve waited for years to both find a place/person where I can ask the question and then also get an answer. Thanks to you, yet another lost puzzle piece of my life has been found. :–)

Thanks for the info on the upper level. I’m not surprised that I got it wrong. Memories start to fade and/or blur together. I know now that I was confusing the Arion with the movie house on Queens Blvd. where they used to show the movie, “The Rocky Horror Picture Show,” at midnight. Am I remembering that correctly or was that still another theater? The layout I’m thinking of had bathrooms and the projection booth on the upper level.

As far as the gent with the speech impediment goes, I remember a fella taking tickets and giving the patron back a stub while Ms. Zakar sold the tickets in the booth. I don’t know if that was the same man.

BTW, I’m sorry it took me this long to get back to this site.

Thanks again for the info.

1928 ads describe the Arion as “The Home of Talkies” although, perhaps not the first to be wired for sound as indicated in the overview (see later comments).