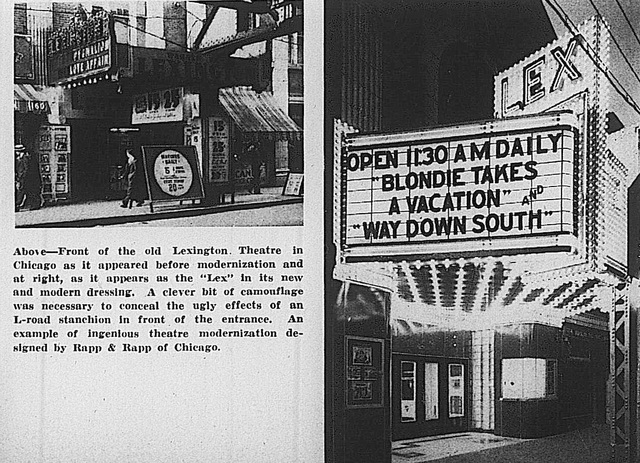 Located in the South Side neighborhood of Woodlawn, at E. 63rd Street and S. Woodlawn Avenue, the over 700-seat Lexington Theatre was opened in 1913 for the Ascher Brothers circuit. It was designed by architect John E.O. Pridmore. It was remodeled in the summer of 1939 to the plans of Rapp & Rapp and was renamed Lex Theatre.

It operated into the 1970’s before closing, showing adult films in its last few years. The theatre has since been demolished.

Architect was apparently JEO Pridmore. The September 25, 1912 Tribune article lists seating as 1800, but the description of the theatre seems consistent.

The Lex theatre, like many other theatres in Chicago in the late 60s-early 70s, switched to an “ADULTS ONLY” policy in an attempt to survive. In the late 50s through the 60s, the Lex played mostly triple features with a 4 change a week policy- very similar to the Mode theatre. Lots of westerns, horror/sci-fi, comedies, and dramas.In 1969 or 1970, there was a minor name change: LEX PLAYHOUSE. From the Chicago Sun Times movie directory,Sunday May 31, 1970: LEX PLAYHOUSE 1162 E. 63rd St. OPEN 11:30 A. M. FOR ADULTS- 18 YEARS & OLDER ONLY “BUSHWACKERS” & “HOUSE NEAR the PRADA”. I think within two years the Lex closed.

At the Theatre Historical Society in Elmhurst,IL. ,you can see: a weekly flyer (circa 1941) of the Lex- COOLED by refrigeration-1162 East 63rd Street -DORCHESTER 1085. A number of films are advertised inside the flyer; here and there are phrases like PUSH BACK SEATS,FREE CHECKING SERVICE, PERFECT SOUND. Also, a nice shot of the outside -circa 1936. 2 BLOOD CURDLING HORROR PICTURES! KARLOFF THE WALKING DEAD plus REVOLT of the DEMONS(the name was changed;it’s actually REVOLT OF THE ZOMBIES).A number of people are standing outside, by and near the boxoffice. All look like they’re having a good time. Oh, and a skeleton is hanging near the boxoffice, and a guy in a skeleton mask and outfit is on a hospital bed?!?! Most of the people are looking into the camera.

Hre is an exterior picture of the Lex by the left corner http://www.chicago-l.org/trains/gallery/images/6000/cta6372.jpg