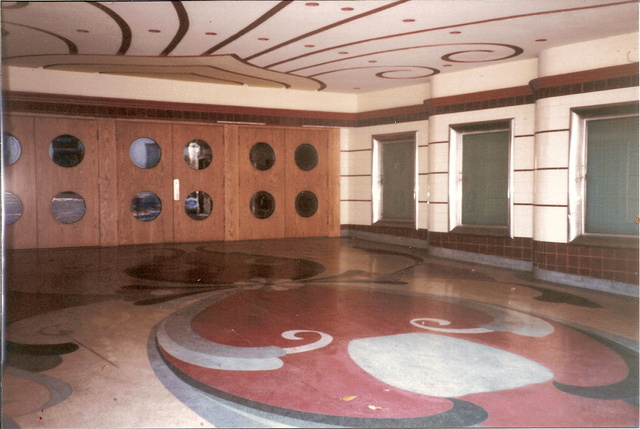 Opened on January 5, 1929 as the New Sequoia Theatre, developed by Ellis John Arkush, an owner of a chain of movie houses on the San Francisco Peninsula named Peninsula Theatres Company. Arkush was said to have toured Europe, viewing famous buildings which gave him ideas for the New Sequoia Theatre. The building was designed by the Reid Brothers of San Francisco, and featured and Atmospheric Moorish styling in the interior and Gothic Revival styling on the exterior.

Although used from the beginning for motion pictures, the New Sequoia Theatre had a stage for vaudeville and a pipe organ by the Robert Morton Organ Company. A projection machine was provided to show moving clouds and twinkling starts across the ceiling. Hand-carved tiles were used extensively in the interiors. The building was purchased by the Fox West Coast chain in October of 1929, and was used for movie attractions for a number of years.

After a partial collapse of the main auditorium ceiling over the balcony in June 1950, the Fox Theatre underwent extensive remodeling on the interiors, specifically in the auditorium area which was re-done in the Skouras style identified with many Fox movie houses. The new design was done by architect Carl G. Moeller and it reopened on September 15, 1950, with a slightly reduced seating capacity of 1,325.

In 1993, the Fox Theatre was placed on the National Register of Historic Places.

There are additional photos of the the theater, includin interior photos, on this webpage.

Nice link thanks for posting.

Great interior photos of the Fox Theatre, brought back so many memories. THANX!

Yes. Those are waaaay old but great pics!

I grew up on the SF Peninsula (San Carlos) during the 50’s and 60’s and the Fox was one of 3 theaters (along with the Laurel and Carlos in San Carlos) that became nearby homes away from homes to escape the parents. During that time the Fox showed mostly 1st run American International horror films and 20th Century Fox releases. The auditorium was in great shape then and quite beautiful. The proscenium was drape covered and lit with alternating colors at intermission. There was a round clock above the left front exit tunnel lit in blue neon and the name of a local nearby car dealer (EZ Davies – who probably paid for it) across the top half. Sneaking up to the balcony without getting caught was the Saturday matinee game we played with the uniformed usherettes (never using the lobby grand entrance but the one to the right of the snack bar). Saw many many Elvis/Christopher Lee/Vincent Price films here.

The Fox was a beautiful theatre. I feel very fortunate to have worked there for so many years. Still miss it. Stevenj is very accurate with his memories/descriptions.

Re-opened September 2010 Located in the heart of downtown Redwood City; the Fox Theatre is the premier live entertainment and rental venue in Silicon Valley. Downtown Redwood City has over 60 dining options within walking distance of the Fox for pre or post-event dining. The capacity of the Fox Theatre is 1,348 amongst its three floors. Club Fox capacity is 240 and is right next door to the Fox Theatre, allowing for endless possibilities for public or private events. We also have the ability to book the Courthouse Plaza directly across the street from the Fox, providing open air or tented event experiences for 500 to 1000