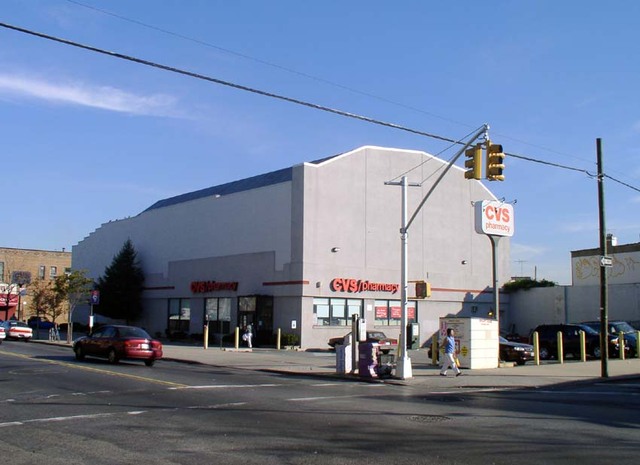 Located in the Ridgewood section of Queens. The Oasis Theatre was opened on September 16, 1927 by Sol Brill. It was soon taken over by William Fox. It then became part of the Randforce Circuit, later a division of United Artists Theatre Circuit and eventually the Randforce name was changed to UA. The original capacity was for 1,750 seats. It changed from first run to second run double bills a few times that I remember. Many times the film from the Ridgewood Theatre would move here with a second feature.

The last film to play was “Rocky” in 1976, when it closed and became a roller rink for many years. It became a CVS in the former auditorium, with the front of the building demolished for a parking lot. By early-2013, CVS had moved out and the building was vacant. By 2014 it was in use as a second-hand store.

This page from the New York City Organ Project has several vintage photos of the Oasis Theatre’s entrance and auditorium. Click on each image to open it to full size.

Wonder if the organ was still around when it was converted to a skating rink. That would have been cool to have the heritage as part of the modern.

I wish pictures would surface of the later marquee.

CVS built a new store a few blocks away and this will be closing shortly. They have banners hung announcing the property for lease.

I was afraid of that when I saw them building the new CVS on the site of the old Meyer Chevrolet. I guess the Oasis will begin yet another chapter, and I hope that doesn’t include total demolition, even if the building as been partly destroyed by fire, partly demolished, and so forth. We shall see.

the “later” marquee was lighted with a progressive routine that was unique and difficult to describe. the lights went on…off…on…off…and then “snarled”. it was really cool. does anyone remember this?

Not only that, the CVS moved out about a year ago, and the “store” is now vacant.

Its a junk store now.

jgraif, are you Joseph N. Graif, Saint Francis Prep, Class of 1972, Miraculous Medal, Class of 1968 ? I am Peter Koch, SFP, Class of 1973. We spoke briefly about music from the film “2001” (“Atmospheres” by Gyorgy Ligeti)once in May 1972, at the Bedford Avenue L subway station. I don’t remember the unique progressive routine that the later marquee was lit with. I only saw one movie at the Oasis, on either the first or second Saturday of January 1976.

Anyone remember the “punk rock” concert at The Oasis in 1978? The Ramones and Richard Hell and the Voidoids. The Queens locals wanted to kill them. Police were called and the show was cancelled. Now the Queens Museum is running a Ramones exhibit.