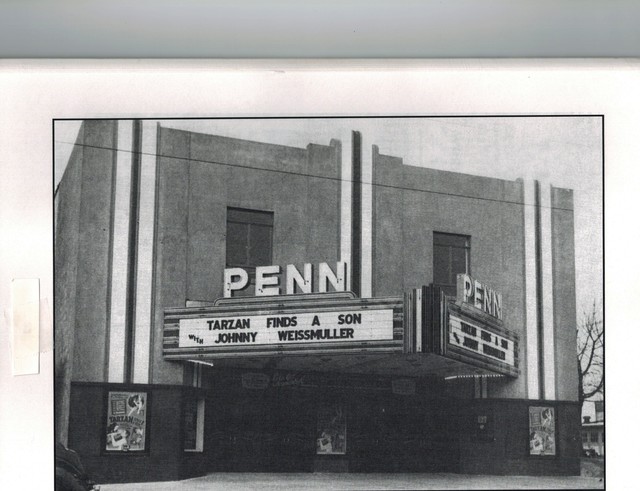 Today the building is in use as a dance studio.

A list of theaters in Reading published in the January 1, 1916, issue of The Moving Picture World includes a Penn Theatre on Penn Avenue, West Reading. However, this 1916 house was probably in a different building.

An article in the February 19, 1984, issue of the Reading Eagle telling of the closing of the Majestic Theatre in Mount Penn, which had opened on November 10, 1939, says that “[s]hortly after the Majestic opening, Wilmer and Vincent opened the Penn Theatre in West Reading, in a building that currently serves as a piano showroom.”

The building might have been new construction in 1939, or Wilmer and Vincent could have taken over and remodeled the old Penn Theatre. The back of the building can be seen in Street View, but it is made of common brick painted over so the only real clue as to the possible age is the large size of the bricks, which would argue for the later construction date, the use of large bricks having been rare until the 1930s. It’s possible that the original Penn Theatre was on the same site and was demolished to make way for the new house.

The Penn Theatre closed sometime between October, 1953, when the Eagle reported that the theater’s safe had been robbed by burglars, and 1956, when a news item said that the West Reading Fire Department would hold its annual children’s Christmas party in “…the former Penn Theatre.” The Orth Music Company was advertising its new location in the Penn Theatre Building by May, 1958. It’s likely that the Penn was one of the many neighborhood theaters closed in the mid-1950s due to the high cost of equipping a movie house for wide-screen productions.

I suspect the closing of the Penn Theatre had more to do with market manipulation than the cost of renovating for wide screen.

The deed to the Penn Theatre when it was sold specifically prohibits it from ever being used as movie theatre in the future. That sort of deed restriction was more common than one would imagine.