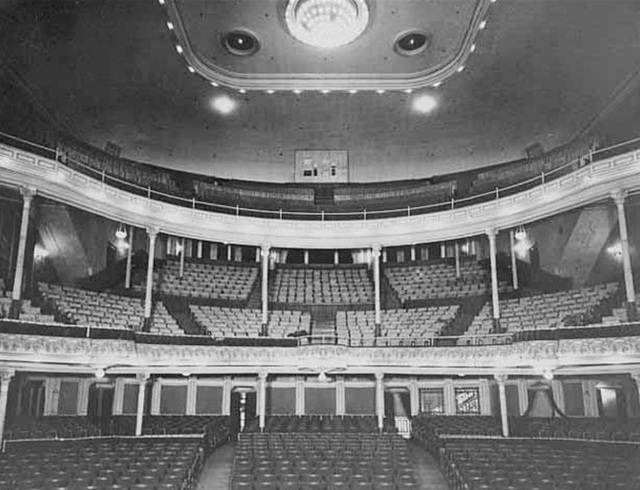 The People’s Theatre on First Avenue was originally set to open by Christmas 1893, but when, during construction of the theater, a large steel girder fell and crashed through the auditorium floor, construction was delayed until March 1894, when the 2,200-seat playhouse finally opened to the public.

The Baroque-style decor inside was elaborate and as opulent as theater as Minneapolis had yet seen. Its auditorium, glittering with gilt, was decorated in shades of white and green, and on its opening night, the mayor of Minneapolis was on hand to make a short speech amidst the standing room only crowd. In 1898, the theater was renamed the Metropolitan Theatre.

Among those to appear on the Metropolitan’s stage during the early years of the 20th century were Lillian Russell, Sophie Tucker, John Phillip Sousa and Al Jolson.

While the theater was technically legitimate for its first couple decades in operation, movies were screened at the Metropolitan Theatre as early as 1898, when primitive films of a boxing match were shown. It wasn’t until midway through the 1920’s that the theater turned to movies exclusively.

The Metropolitan Theatre was considered old-fashioned by the 1930’s, and it was shuttered in 1937 and not long after, was demolished.

The Three Stooges Fan Club is trying to confirm dates, AND NON-DATES for Billy Rose’s show “A Night in Spain”, which MAY HAVE played the Metropolitan Aug. 20 to 25, 1928, and Rose’s “Crazy Quilt”, which was scheduled, then BANNED April 6, 1932, and subsequently moved to an unknown venue in St. Paul for April 7 to April 12, 1932. Any confirmations and additions to the above will be appreciated. Frank Reighter

The obituary of architect Harry G. Carter in the March 5, 1910, issue of The Improvement Bulletin listed the Metropolitan Theatre in Minneapolis as one of his works.