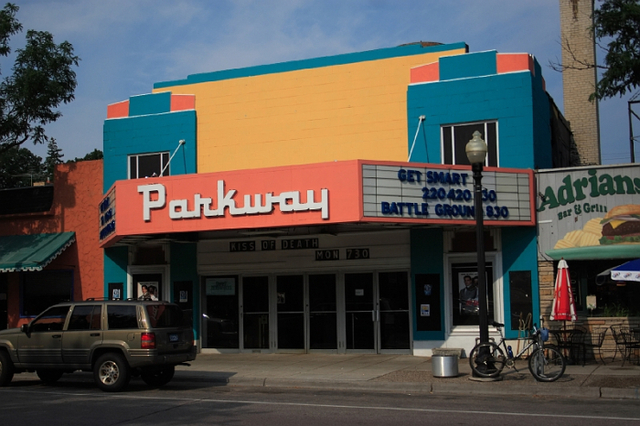 The small 630 seat Parkway Theatre opened in 1931, a simple neighborhood house on the southern edge of Minneapolis. By the early-1970s, its then-owner decided to switch to pornographic films, in order to stay afloat. However, not long after, Bill Irvine, who was the manager of the theater at the time, purchased the Parkway Theatre, and started to screen art and foreign features.

The Art Deco style Parkway Theatre remains one of the only single-screen movie houses in operation in the Twin Cities, renowned for its unusual and offbeat film variety as it is for its homemade popcorn with fresh butter.

It looks like the Pulse article jumped the gun a little bit. The Parkway is currently for sale, but apparantly the owner has decided to continue operations in the meantime.

The Parkway has been purchased by the owner of Pepito’s, the nextdoor restaurant.

It appears that the new owners of the Parkway are currently removing the streamlined style metal facade that has been on the theater for decades. An old terra cotta facade is beginning to be re-exposed. From what I’ve heard Pepito’s is planning on using the theater as some form of a club, which I think is not a bad reuse, but only if no major alterations to the interior occur. The art deco staircases in the lobby and the elaborate ceiling in the auditorium NEED to be kept and I encourage people to make sure that this detail gets preserved.

The new Parkway is running adverts in the Minneapolis Star-Tribune for the films it’s showing.

for more information visit the Parkways website at: www.theparkwaytheater.com

This string of comments is misleading if read from the start. Parkway never closed. Former owner Bill Irvine sold it to his friend and business neighbor, Joe Minjares, who owns the neighboring Pepitos restaurant. Joe has been carefully restoring the interior for many months. Screenings have continued virtually unabated. To keep the place solvent, Joe removed a block of seats in front of the stage, allowing music (New Year’s Eve), plus speakers, live theater, poetry slams, etc. He has had several midwest premiers, bringing in the producer (as he did with Love in the Time of Cholera), the director (Reilly—a documentary about Charles Nelson Reilly) and as he is doing this weekend with the director of Billy the Kid, Jennifer Venditti. He also shows football games, including the Super Bowl, there.

I live 100 feet from the theater and know Bill and Joe well. I reassembled one of the theater’s original Simplex/Peerless carbon arc projectors for the lobby, where it sits today. (photos here http://nc.startribune.com/blogs/classiccars/?p=44 ) Bill is a big-time fine-cinema fan and so is Joe, who also has Hollywood acting and writing experience, including screentime with Christian Slater in Untamed Heart. This is a moviehouse by film fans for film fans. (Here’s Joe’s IMDB line, for readers' information: http://www.imdb.com/name/nm0591406/ )

This theater is included on a list of buildings designed by architect Perry E. Crosier, held by the Northwest Architectural Archives at the University of Minnesota.

The pressure by the studios to force theaters to convert to digital projection may be placing this theater’s future in jeopardy: View article

According to the website, this theatre has not yet gone digital.