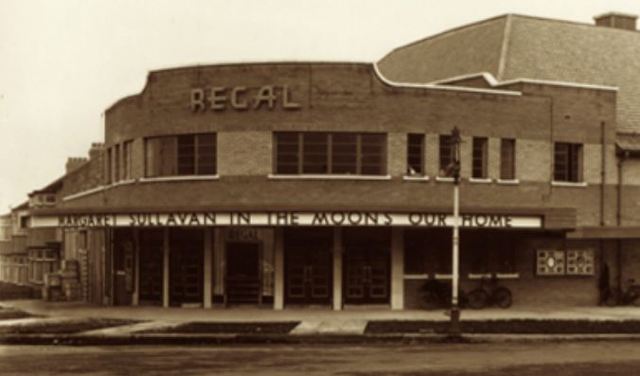 Located in Monkseaton, a district to the west of Whitley Bay, Tyne & Wear, on the corner of Cauldwell Lane and Seatonville Road. The Regal Cinema was opened on 4th November 1936 and had a seating capacity for 1,020. It was operated by the owners of the Playhouse, Whitley Bay.

The Regal Cinema was taken over by the Newcastle based Essoldo chain in August 1949. It was closed on 11th August 1964. It was converted into a bingo club.

Later, renovations were carried out and it was re-opened as a cinema on 23rd January 1972. Taken over by the London based Classic Cinemas chain on 2nd April 1972, it passed to the Cannon Group in 1976.

The Cannon was twinned and re-opened on 18th July 1977 with seating provided for 351 in screen 1 and 115 in screen 2. It was last operated by a management buyout from the former ABC company and was re-named ABC, which was closed on 15th April 1999.

The building was demolished in August 2000 and housing was built on the site.

The location given is incorrect. It was actually situated at the junction of Cauldwell Lane and Seatonville Road. When it reopened in January 1972, it was with the Classic name, even though Classic did not take over the Essoldo circuit until April, and it was fitted with very comfortable armchair seats, which were staggered so as to give the best possible view of the screen. It was a very pleasant place to watch films. The first film to be shown was “Waterloo”. Programmes tended to be more upmarket than at the Classic, Whitley Bay about a mile away. I recall seeing “Death in Venice” here. When the second cinema was opened, the size of the main auditorium was slightly reduced, but the new cinema 2 was a lot less satisfactory being long and narrow, and also very tall, as it retained the original high ceiling.

JohnGn: Thanks for the update. The address and Google Street View have been corrected.

It was never renamed Essoldo; the name Regal was retained as the former Playhouse just down the road bore the Essoldo name.

After eight years as a Bingo operation, Essoldo decided to return the Regal to film exhibition and , by narrowing the auditorium and by installing luxury seats in a modern configuration, the capacity was reduced to a mere 405. Classic took over a little while after the cinema’s reopening but were allowed by Essoldo to put their sign up in anticipation of the takeover – it would, after all, have been silly to call it the Essoldo for such a short time………

The ABC name was added at a very late stage in its life after a buy out by Cannon’s directors (backed by CinVen) who decided that , after all, the ABC name was superior to that of Cannon who could not wait to consign it to history in 1986.