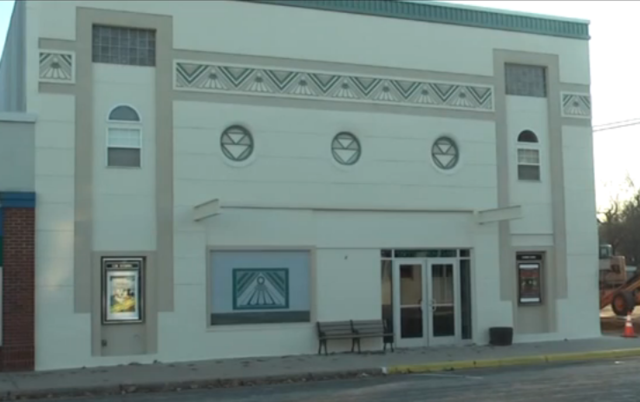 The Lewis Street Playhouse, first known as the Miller-Starr Opera House which opened on December 4, 1893 at 405 Lewis Street in Canton. The facility hosted traveling stage performances in the 1800’s and early-1900’s. It began screening movies in 1917. It was remodeled in 1938 and functioned as the Canton Theatre (Movies).

After standing vacant since the early-1980’s, the Canton Area Arts Council began plans in 2005 to revitalize the facility, and work was completed on the beautiful Art Deco style building in 2008.

The 5,000-square foot space has been renovated to include stadium-style seating, state-of-the-art audio system, updated Art-Deco inspired decor and concession stand. It is also home to Canton Festival Theatre.

The theatre plays subrun movies and is closed during July and resumes showing on week ends in late-August.

Opened as a movie theater in 1939, which must be when the remodel to art deco happened.

The Miller-Starr Opera House launched December 4, 1893 with the live play, “Two Old Cronies.” A.J. Miller was on hand with Captain N.D. Starr. Live theater gave way to motion pictures in 1917 competing with the Gem Theater. The Gem won the battle and the old opera house was used for sporadic live local events. It closed in 1922 becoming home to a jewelry store followed by a number of other businesses including Harry’s Tavern and Wood’s Tire Shop.

John Louis Collins of the Collins Theatre Circuit acquired both the New Gem Theater in 1932 and, later, the former Opera House in downtown Canton. Collins virtually razed the opera house which had been altered many times for a variety of businesses. Collins Theatres created a new-look, deco venue built in 1937 designed for sound motion pictures.

Collins turned the managerial reins over to Raymond McBrayer in October of 1937. He finished the project and closed the long-running New Gem Theatre after just over 25 years on November 9, 1937 with “Manhattan Melodrama.” McBrayer would launch the Canton Theater for Collins Circuit three nights later in the former opera house location on November 12, 1937 with Bing Crosby and Martha Raye in “Double or Nothing” supported by shorts including Eddie Peabody in “Hula Heaven” and a Mickey Mouse cartoon.