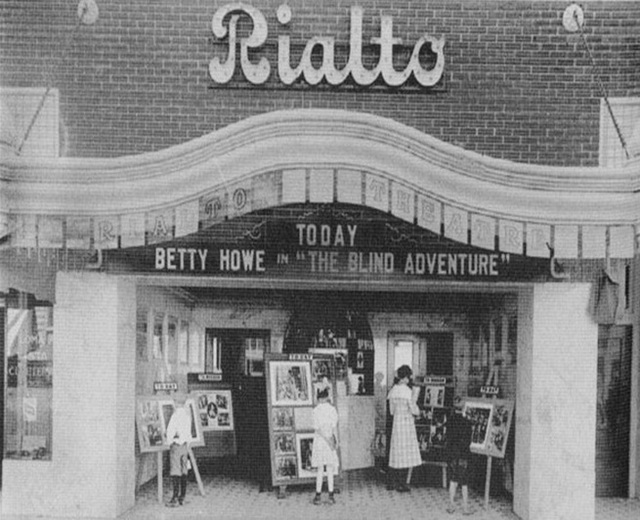 The Rialto Theater never made it beyond the age of silent movies. According to a local history book, the building was built in 1905 and used as a movie theater from 1917 to 1927.

In 1925, its manager left to become the first manager of the Alician Court Theater (now the shuttered Fox Theater), which became the place to go in town. Newspaper movie listings show that the Rialto Theater hung around at least until the middle of 1928, charging reduced admissions for films like those starring Flash the wonder dog, MGM’s answer to Rin Tin Tin. By this time the Alician Court Theater, with its name changed to the Mission Court Theater, was playing the latest Douglas Fairbanks swashbuckler and preparing to become Orange County’s first sound-equipped theatre.

In 1930, the Rialto Theater was converted to a bank with its exterior remodeled to zig-zag modern style by architects Walker & Eisen, completely unrecognizable from its vintage photographs. Having been used in recent years for retail uses, it is now called the Rialto Building and can be seen in downtown Fullerton today.

The owner of this theatre is Ed Lewis and he is insane.

The 1930 remodel, in to the First National Trust Bank, was designed by the Walker and Eisen firm.

Here is an indoor Google Street View of a photo hanging on the wall of the Rialto Cafe, 108 W. Wilshire Avenue in Fullerton. The photo shows the Rialto at the left, probably about the time it opened. This is the only photo of the Rialto I’ve found on the Internet.

Unless the project incorporated an existing building (which it might have done), the building dates from 1917, not 1905. The Rialto itself certainly opened in 1917, though, and the project of which it was a part was mentioned in issues of Southwest Contractor & Manufacturer that year.

The first mention of the project was in the issue of February 3, and did not include the theater, but the March 17 issue described an expanded project in which a theater was now included:

The April 28 issue of the magazine says that ground had been broken for the project, and notes the location as the corner of Wilshire Avenue and Spadra Avenue (now Harbor Boulevard.) The theater was to have a frontage of forty feet and extend the depth of the building.

Frank K. Benchley was probably Fullerton’s most active architect during this period, and a number of his buildings are still standing.

I don’t think that Walker & Eisen should be credited as architects of the Rialto. The only work they did on the building was after the theater had closed, when it was converted into a bank in 1930. The splendid Art Deco facade they designed would have made a nice front for a theater, but it never was.

It is possible that the part of the building the theater was in dated from 1905 and was incorporated into the 1917 project. In the early photo at the Rialto Cafe, the theater part of the building, given a fancy new facade when converted into a bank in 1930, and the office and commercial building on the corner, remodeled in a simpler style at some point, then had a single, unified facade.