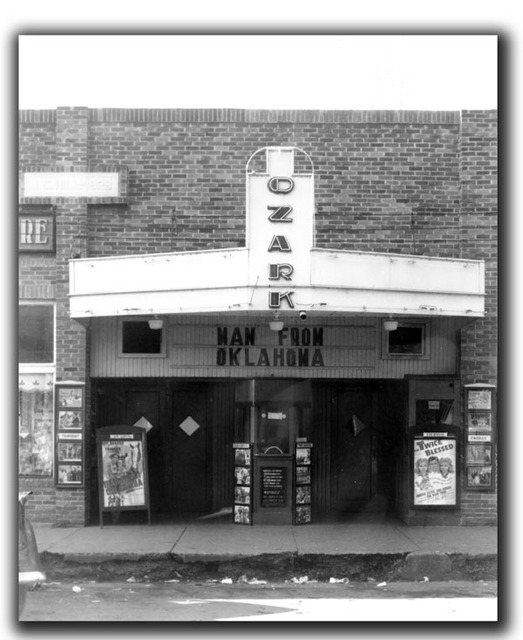 The Ozark Theatre opened May 2, 1929 with Irene Rich in “Craig’s Wife” when it was showing silent pictures. It was owned by Carey Hall The theatre was later owned by Thomas & Jess Preddy and their sister Ardelia Tucker. On November 2, 1930 the theatre had been wired for sound and talking motion pictures were shown. In 1944 Glen & Clairece Hall bought the theatre and it remained open until August 11, 1946 when the new Hall Theatre was opened.

The history of the Ozark Theatre does not jibe with the local newspaper or the trade press of the era. So if they are both incorrect, the above is fine. According to the local newspaper and the trade press, they claim that the Ozark Theatre launched May 2, 1929 with “Craig’s Wife.” It was a new build venue with sloped floors and was the new home of the former Gem Theatre. The building was built by Carry Hall and the theatre was opened as a silent house.

A big deal was made about the wiring for sound which took place in 1930. “Lord Byron of Broadway” was the first sound feature and carried a hefty $1 admission on November 2, 1930. The south side of the square venue closed August 11, 1946 when Glen Hall launched the new Hall Theatre.

Wider, crisper version of the 1945 photo added, which when enlarged separate from CT shows “J.C. Hill-1929” on the rectangular stone in the brick work in the upper left hand corner. Which coincides with the above comment.