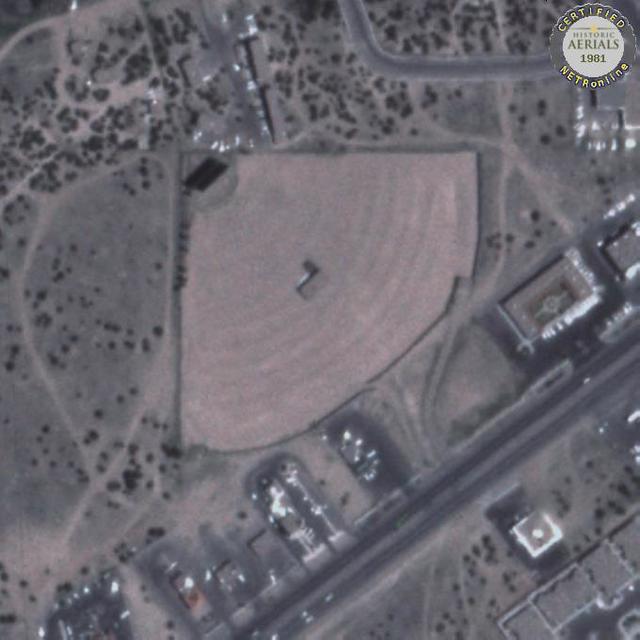 The Pueblo Drive-In was the second to have this name in the Santa Fe area. (the first was in Tesuque, north of town which opened in 1950 (It has is own page on Cinema Treasures).

This Pueblo Drive-In was opened on May 29 1958 with Gene Kelly in “Les Girls” & Rex Reason in “Badlands of Montana”. It was operated by Greer Enterprises. On December 31, 1967, according to the Santa Fe New Mexican, then owner Frontier Theaters sold four local theatres to Commonwealth Theaters. The theatres involved were the Pueblo, Alley, Lensic, and El Paseo.

While being operated by Commonwealth Theatres, it closed in September 14, 1980 with Betsy Palmer in “Friday the 13th” & Cheech Marin and Tommy Chong in “Up in Smoke”. It never reopened. Wal-Mart occupies the site today.

Santa Fe New Mexican, April 13, 1958: “Greer Enterprises now is in the process of building a “new home” for the Pueblo Drive-In in a more convenient location, and at the same time is expanding facilities at the movie theater. Site of the Pueblo is being switched from the end of Tesuque Drive to Cerrillos Road, and it is scheduled to begin operation about May 1. The new location will provide room for 600 cars, compared with 400 in the old location, and a new 40 by 80-foot, all-steel curved screen is being installed along with modern projection equipment and new snack bar and playground facilities. Second run films from the Lensic will be shown at the drive-in.”

This new location for the Pueblo held its Grand Opening on May 30, 1958, with a program of “Badlands” (probably “Badlands of Montana,” a 1957 movie starring Rex Reason) and “Les Girls” starring Gene Kelly. 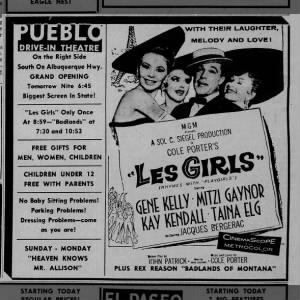 The final ad for the Pueblo, in the Commonwealth Theatres section, was on Sunday, Sept. 14, 1980. The program was “Friday the 13th” and “Up in Smoke.”