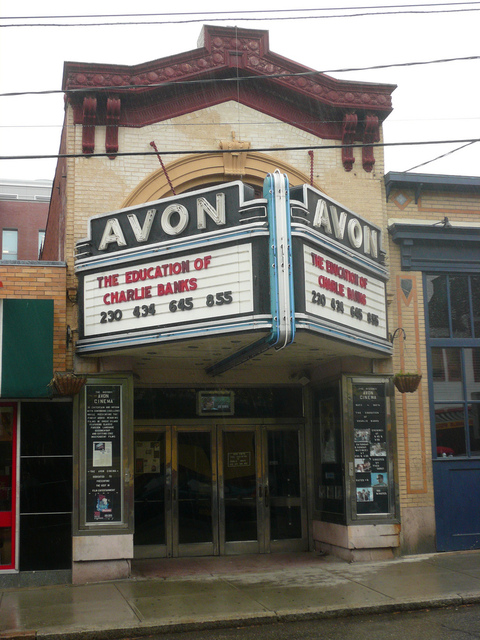 The Avon Cinema has long been considered Rhode Island’s premiere art house. It opened in February of 1938 in a building that had seen a previous existence as the
short-lived Toy Theatre in 1915 and in the period of time around that year. The unsuccessful Toy Theatre soon closed and became a garage for over two decades until the facility was remodeled and opened as the Avon Cinema.

The policy of art and foreign films was put aside during the early 1940’s when the Avon Theatre became a second run neighborhood theatre with an emphasis on double bills of recent American releases. After World War II, the theatre became a full-fledged art house with the kind of programming that made it unique and with movies that generally were not shown anywhere else in the area. The mainstay was European films, particularly those from France and Italy, with a very large number of British dramas and comedies as well. Some “special” American films were also premiered here, such as “Marty,” which had a long and successful run in 1955.

This first-run “class” policy continued through the 1960’s, with some occasional digressions. In the 1970’s the Avon became a repertory house and was known as the Avon Repertory Cinema. Double bills of popular foreign and American films of quality filled the screen, usually with bills changing three times a week. During that period most of the first run art-house films went to the Cinerama Theatre, located on Hope Street near Rochambeau Avenue. After the closing of the Cinerama Theatre in 1983 and the waning popularity of repertory programming, the Avon Cinema returned to its original policy, that of showing first run foreign and domestic films of distinction.

The Avon Cinema has survived as a single-screen cinema in the age of multiplexes because of its specialty programming that attracts a faithful audience, from the upscale East Side area and from the entire Providence area, and because of its advantageous location on teeming Thayer Street in the middle of Brown University. It has become a respected Providence and Rhode Island institution.

Cool Nick.I have changed a few in my time too.

The ladder used to be kept outside in the alley on the opposite side of the building. In the 60’s we used to have a spotter to prevent Brown & RISD kids from toppling the ladder while you were up there!

I recently was invited down by Richard Dulgarian to work the Carbon Arc Projectors, which are the original projectors in operation since 1938. I might be taking on the Saturday projection shift at the theater. It is a beautiful single screen movie house that still holds onto movie magic. One of Richard’s tests for projectionists is “the start up” or when the show begins. The curtains are closed, you fire up the carbon arc, turn on the motor to the projector, open up the dowser, start the change over so the image spills onto the curtain, and then you open up the curtain…so you never see the projection screen without the magical carbon arc light hitting it. Its part of the magic of Cinema.

From Boxoffice Magazine, December 2, 1950:
“Employees of the Avon Cinema had plenty of cause to be thankful on Thanksgiving. Charles R. Darby, manager, presented every employee a big plump turkey! Recently Darby scored with plenty of well-planned publicity on his twin bill of "The King’s Jester” and “Pagliacci.” The city has a large Italian population and Darby arranged a quiz program on a local radio station offering guest tickets. “The Red Shoes,” which ran for eight weeks at the Avon some time ago, has been scheduled for a return engagement."

“The Avon Cinema management took quick advantage of the front page publicity anent the battle between the Providence board of censors and the Playhouse [on Westminster Street] over the staging of "Tobacco Road” by bringing back the screen version of the Broadway hit. On the same program was “Grapes of Wrath”…[Note: both directed by John Ford.] —-item in Boxoffice magazine, January 17, 1953.

Long run for Never on Sunday. Item in Boxoffice magazine, July 10, 1961:
“The Avon Cinema, which broke all boxoffice records when it showed "Never on Sunday” for the seventh straight week, did not quit there. It announced the movie was being carried for its eighth week."

Edward C. Stokes has been named manager of the Avon Cinema, east side art house, replacing Nelson Wright, who resigned to enter the automobile business…The R.I. premiere of “Manon” took place at the Avon.

The Avon Cinema in the aftermath of the blizzard of 1978. Article from Boxoffice magazine, February 13, 1978:

What happened to Ken Dulgarian, manager of the Avon Cinema, Providence, during a recent weekend storm could well make for story-line of a screen project. The cinema screened Warner Bros.‘ “Casablanca” plus “Flesh Gordon” that weekend; advertised was Paramount’s “Barbarella,” 1968 release. It was learned that the Paramount exchange in Boston found another film in the can that was supposed to contain “Barbarella,” and, as a result, Dulgarian continued his engagement of “Casablanca.” On Friday, Dulgarian, cognizant of the heavy snow, hired a limousine to get from his home to the theatre. There was nary a taxi to be had. As matters wended their way, the short ride expanded to two-and-a-half hours; Dulgarian picked up his projectionist on his way. An “almost sold-out” house that night, an evening when the competition either was shut down or played to skimpy numbers, brought out ever-loyal Avon Cinema patrons indeed! He showed “Casablanca” and “The Maltese Falcon” Saturday. “Barbarella?” It’ll be along!

[Note: in those years the Avon was a repertory cinema showing revivals of both classics and more recent films with several changes of programs a week.]

Great promotion of a film!

Providence – A younthful bicyclist, wearing false nose and glasses and a sign on his back reading, “Who is ‘The Bicycle Thief’ at the Avon Cinema?” created so much excitement in downtown Providence that local police stepped in and halted the stunt.

The result, however, was more publicity for the picture than Charles R. Darby, Avon Cinema manager, had bargained for. In addition, there were such crowds storming the Avon that standing room only signs were up early before each performance.

Darby hired the youth to simply ride the bicycle through town wearing the costume and sign, hoping that he would attract attention. He attracted so much attention that a traffic jam was narrowly averted only when police stepped in and stopped the cyclist.