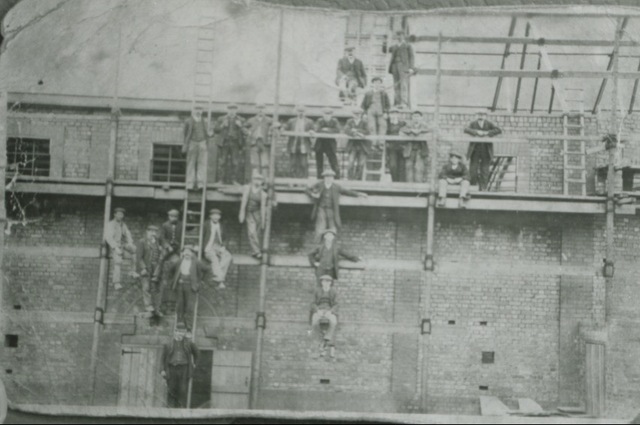 The Coliseum or “the Col” as it was referred locally was built in 1922 for Ebbw Vale Theatres Ltd. who already operated all of the cinemas in nearby Ebbw Vale, just 2 or 3 miles away. At the time cinema was becoming a popular and affordable leisure activity in the industrial valleys of South East Wales, providing much needed escapism from the dust, dirt and grime that dominated the hillsides and valleys at that time.

With seating for 839 patrons in the stalls and balcony the Coliseum Cinema was pretty unique in size for such a small village. Built using traditional red brick, common throughout the valleys the cinema featured a 30ft proscenium with 4 dressing rooms facilitating use as a cinema and occasional live performances and political rallies that were popular in this area of Wales.

Opening in 1922 the cinema was hugely popular with locals preferring to see a film at the Coliseum Cinema rather than taking the short 8 minute journey by bus to nearby Ebbw Vale. The structure dominated the village, unfortunately its close proximity to the River Ebbw that flows through much of the village meant the Coliseum Cinema was not only popular with the local but the rats from the River Ebbw too. Even so, there were two changes of programme weekly. Between performances the staff would complete a brief fumigation of the auditorium, common with many cinemas of the region during this era.

A serious fire severely damaged the balcony, forcing the cinema to close for a short time to allow for repairs, once reopened the balcony was never used again, suggesting that only the vital cosmetic repairs were undertaken. The cinema continued to be popular until dwindling audiences in the area forced Ebbw Vale Theatres to close the Coliseum Cinema in 1955 or 1958, there is a dispute over the actual closure date. By closing the cinema local patrons were then forced to visit the circuits other cinemas in nearby Ebbw Vale.

The Coliseum Cinema was eventually demolished in 1959/60 and the space created was left unused until 1995 when a new community medical centre was built on the site using Government funding.