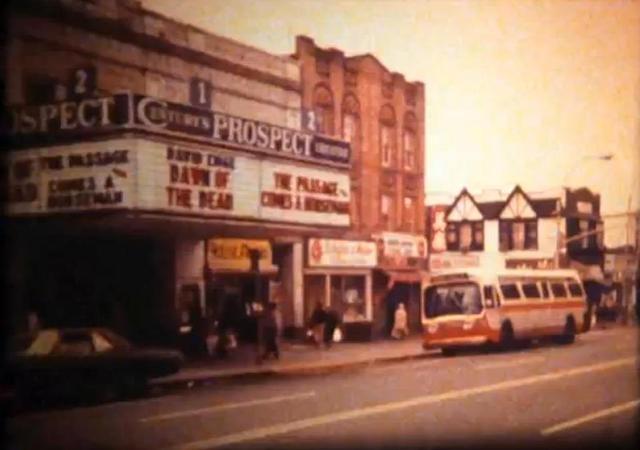 Located in the Flushing section of Queens. The Loew’s Prospect Theatre was a large single screen that opened in 1928 with 2,400-seats. It was designed by architect R. Thomas Short. It was equipped with an Austin 3 manual organ. It was extensively remodeled by Century Circuit Inc. in 1954, to the plans of architect John J. McNamara. It was twinned around 1974 and the downstairs screen was later split into two screen making it into three screens sometime in the late-1970’s. It was closed in 1986 and demolished in late-1986.

It was only a few blocks from the RKO Keith’s Theatre.

The description isn’t quite accurate. I worked as a projectionist at the DeMille Theatre in Manhattan until 1974 when it was closed due to a fire. In the beginning of 1975 I went to work at Century’s Prospect in Flushing. At that time it had recently been TWINNED. I was the projectionist in the downstairs auditorium, which was untouched after the twinning. The theatre had two projection crews, one for upstairs and one for downstairs and ran reels in both theatres. Sometime in 1977 I was asked to switch jobs with one of the projectionists at the RKO Alden in Jamaica (across the street from Loews Valencia) because the Alden was being turned into a quad and the projectionist who worked there was afraid to run platters (he had worked the Alden as a single for 40 years and was 90 years old). About a year after I switched with him they decided to split the Prospect’s downstairs theatre making it a triplex and installed platters in all 3 theatres. Now, there was only one crew for all 3 theatres, requiring the projectionists to run all 3 theatres going up to the original upstairs booth as well as running the 2 downstairs theatres. The climb to the upstairs booth could give a healthy person a heart attack, it was a pretty high climb. John Conway, the 90 year old projectionist I had switched with, having no choice, learned platters and worked at the Prospect, climbing the steps, with no problems until it closed. I believe he was about 99 when it closed.

The Prospect was my second choice for a theater in Flushing in the sixties, following the RKO Keiths which was a short walk away. The bus hub was closer to the Prospect. I seem to recall stars and clouds, on the ceiling that seemed to move, but it was a smaller theater, and usually the better films played at the RKO. The last movie I recall seeing there was, “No time for Sergeants” with Andy Griffith, I had seen many others there, but I just don’t recall. I left NY in 1969.

The Prospect was always the “fun movie” theater compared to the “blockbuster” mode of the Keith’s. As a young child, I actually won a kid’s fire truck during the occasional Saturday morning cartoons matinee show there. Later on during my teenage years, The Prospect was a cheap night on the town with the boys or a date, along with a meal either both long gone Hurdy Gurdy’s (pizza) or Lenny’s on Roosevelt Ave (hotdogs and beer, they were VERY lenient with age verification).

Photo uploaded of marquee in the twin phase.

I saw the Charles Bronson movie “Ten to Midnight” here in 1983. Wow, was that a violent flick.

The Prospect had an Austin three-manual theatre pipe organ in it. It did not have unit chests, so the organ didn’t have much flexibility. The pipework (all on 10" of wind) was sold in the late ‘70s and some of it was incorporated in the instrument currently playing in Chaminade High School, Mineola, NY.

Was the auditorium gutted?

Willburg145 according to the lead the building has been demolished.

Yes, the building was torn down when the Prospect closed in late 1986.

At some point in the 80s RKO Century Warner was formed putting the Prospect and the Keiths under the same management (I won’t say ownership because I haven’t a clue what the case was for each theater).