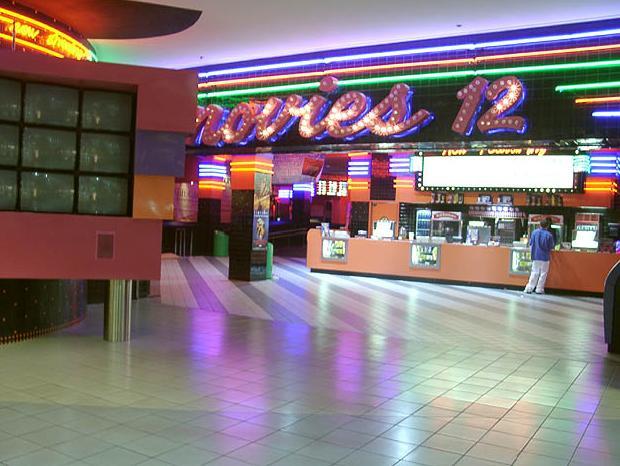 In 1985, the Herring Group of Dallas and Homart Development Co. announced that they would develop DFW’s largest shopping mall, a 1.4 million square foot center known as Vista Ridge. The mall opened in October of 1989 and the Cinemark wasn’t far behind opening that same month. The mall theater was glitzy and gaudy resplendent in purple, red, and green neon tubing. A 3x3 CRT monitor bank had 10 minutes of movie previews and then three minutes of live video where patrons could see themselves larger than life. The theater had an arcade area, large concession stand, and two larger theaters for the biggest films that week. The only competition was a ten-screen theater up the road which became a discount house in the Garden Park Shopping Center.

The theater was an amazing hit. James Terry McIlvain signed autographs during a screening of “Pure Country.” Scott Bakula showed up of “Quantum Leap” fame and signed autographs. And the theater was doing such stellar business that AMC Theatres announced in 1993 it would build its first ever 20-screen theater across the street from Vista Ridge Mall. While that project was dropped as AMC turned its attention to its AMC Grand Project further south on Interstate 35, two new theaters opened across from each other with Trans-Texas’ Vista Ridge 8 and UA’s Lakepointe 10 both opening the same day on December 16, 1994.

Cinemark would take on the Vista Ridge 8 converting it to a sub-run, discount house. The competing Super Saver discount house in Garden Park would close. But in December of 2000, Rave Motion Pictures would open its first ever theater with the high-tech Hickory Creek 16 just to the North on I-35. It was game on and Cinemark’s property began to age quickly compared to the Rave.

Instead of trying to refresh the 17 year old property and do a full digital conversion, Cinemark created a new build Cinemark 15 at Vista Ridge Mall opening with a soft launch on September 20, 2006. That theater would supplant the Movies 12 which remained empty for some time.

Hey, a bit late. But does anyone happen to have any more pictures of this theater? Preferably on the inside? Thanks!