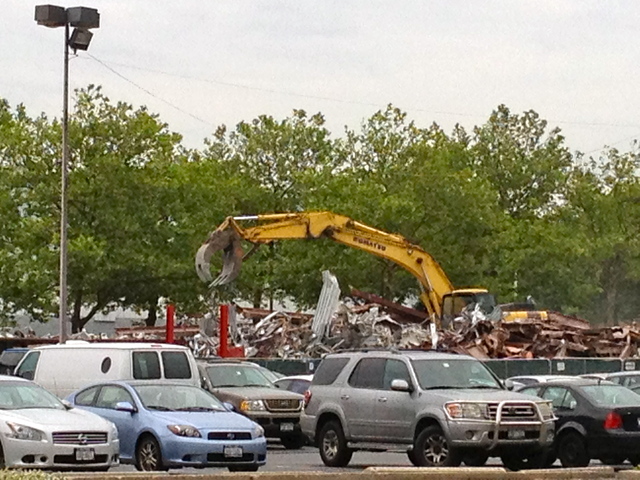 This was one of the Century Circuit Inc. chains' premiere Long Island theaters. The 1,683-seat Green Acres Cinema was opened on September 15, 1961 with Clark Gable in “Gone With the Wind”. It always played big movies and I remember seeing “The Towering Inferno” here in 70mm. Century Circuit Inc. first cut it up to three screens on December 14, 1983. On June 22, 1988 it became a sixplex.

RKO and later Cineplex had stiff competition here because National Amusements built the Sunrise Sixplex which was up to 25 screens when it closed on January 19, 2015. National Amusements eventually acquired the Green Acres Cinemas in 1991 and booked the more upscale product here.

I bet when it was open, it was the place to be!?

Loved this theater when it was a single screen. Super big screen and great sound. Saw a few Bond films here, all 3 Sensurround movies, Lion Of The Desert with Anthony Quinn, The Right Stuff, Tess, a double bill of Animal Crackers and WC Feilds & Me, and several others. It was first rate theater back then!

The opening film at the original Green Acres in 1961 was “Gone With the Wind,” in a revival keyed to the “Civil War Centennial.” Ad displayed here

We had a Century Theater in Paramus NJ where I’ve posted. It was a beauty just like this one. But unfortunately it was twinned in the very early 70s so I only saw very few films when it was single screen. It was split down the middle so you were watching a small screen from the side. Kind of like the Quad in Manhattan but at least there you were looking at the screen head on. It was a very sad harbinger of things to come when showmanship began to be discarded. But you hardly needed showmanship for a lot of the films they began making in the 70s. That died out with Oliver and Funny Girl.

So take that, Ed…! You’ve been schooled.

I guess perhaps I have! It has been nearly 40 years, and the both theaters were down the road from each other. Thinking back in my mind’s eye, I suppose the theater where I saw the Right Stuff was a bit smaller than the Green Acres would have been (I remember because I was a third wheel on that particular night, and after the movie we grabbed a bite at Red Lobster). The other films I mentioned were definitely here at the Century’s Green Acres. Ridethectrain, I have a similar memory of seeing Evil Dead at the Green Acres, then chowing down at Red Lobster afterward. Am I also wrong about that one?

The few films I saw there when it was a single screen, Ghandhi, For Your Eyes Only, Victor Victoria and Death Wish 2. Saw many films when it was a triplex and a sixplex

Never saw a film here once it was triplexed. I saw all those films you mentioned at this theater as well. But not The Right Stuff it seems! Jury is still out about Evil Dead.

Only film I ever saw there was a revival of Gone With the Wind. And true to the name the marquee signboard had blown off in a windstorm.