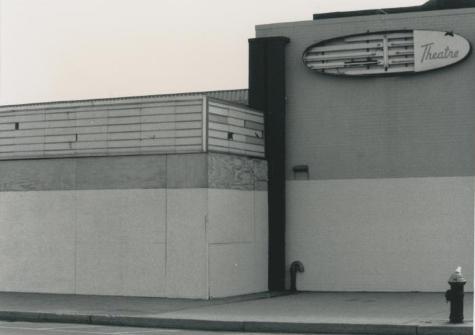 This theatre was built as part of the shopping center in Rochdale Village. It opened on March 4, 1966 with Sean Connery in “Thunderball”. It played first run it’s whole life. It was closed around 1991.

When did the Rochdale Cinema close?

On the opening night at the Rochdale Cinema the feature presentation was “Thunderball.”

I know it was still open in the mid 80’s because I saw Richard Pryor Live on the Sunset Strip. It was a fist run movie theatre and was well kept. I believe around 88 or 89 it was turend into a supermarket and I think it is now partially a drug store. I’ll let you know! Also it NEVER became an adult movie venue!

Just drove by today and its become a mini mall, supermarket and a bed and bath store

The Post Office took over the space of the theater.

i grew up in rochadale and used to go to the movies every week 73-78…saw Saturday Night Fever there as well as countless karate and blaxplotation flicks….great times…The theater was actually were you see the “rite Aid” sign in the pic…

I have lived in Rochdale Village my whole life. The movie theater was located in the site where Rite-Aid is now located. It closed in the late 1980s. Rite-Aid took over the spot sometime in the early 1990s. The last film I saw there was one of ‘CONAN’ movies with the now former Governor of California (the one that featured the late basketball great Wilt Chamberlain and Grace Jones).

Contrary to what many have posted here (I know they’re old) Rochdale Village always had, what is called, the big mall on Baisley Blvd. The movie theater, which closed in the 80’s, was part of that mall. The location was taken over by the Rite-Aid drugstore. Adult films were never shown there. The Post Office has it’s own slot on the opposite side of the mall, as does the supermarket.

I know I am a few years late to this conversation but I wanted to add that Rochdale in itself was a unique place for a kid growing up. Two things that I’ll never forget was 1) The Mountains in Rochdale Village (Yes … Mountains!) that was between the tennis courts and fields near IS72 that I would slide down like a bobsledder during the winter time lol and of course 2) The Rochdale Theatre … that was the name for me but I later found out that it was also called Rochdale Cinema, Brandt’s Rochdale Cinema or Jamaica Rochdale {referred to in the newspapers in the later years} at one time. Just going to this Theater was an experience in itself. I would see things going on in the place that was wild at times (people throwing popcorn to the screen if a film skipped) teens and adults smoking weed, making out in public and other things that was strange to me at that time. These sights added to the fun though and as I look back in essence most of the time, the wilder things I saw was just harmless fun. The movies that came to the theater were not always the most popular {e.g. Super Stooges vs. The Wonder Women, Revolt of The Dragon, Zoltan, Hound of Dracula etc.} and this was also great because I got to see some films that were unknown to many. Some of these films I cannot even remember by name and they certainly did not have many TV airings if any but these memories of seeing them along with popular ones will always be cherished memories. Two years ago, I was interested in doing a little research about some of the movies that played there before my time (late 60s) so I researched checking old newspapers, 35mm reels and trade journals in The Queens, Brooklyn and Manhattan Central Libraries. As of this date I got almost every film that played there from 1966 to 1980. In my findings I verified that the movie that originally played there indeed was “Thunderball”. The ribbon cutting ceremony took place at 8:00pm on Friday March 4th 1966. The newspaper Inside Rochdale News states that 600 seats were filled to its capacity but it appears that this was an oversight {or an exaggeration} as it may have had only 400 seats according Historic Theatres.org. It was fun looking through archived newspapers of the Daily News, New York Times, New York Post and Long Island Press. I found that some listings were not in the movie section but rather in the movie ads. It seems around the beginning of 1980 the listings became more sporadic though. It seems as if the newspapers did not respect this small little theater because at times one billing was shown and at other times the newspapers were not always matching regarding listings. Since there was another movie theater in Queens operated by the same person at the time {Cross Island Cinema in Whitestone} I have an idea of other films that may have made it to Rochdale. At first I set out to do research because I wanted to just get the names of certain movies I saw and see what the double billings were but now I wanna do something more as a tribute to a building that holds a special place in my childhood memories. Also … by the way it’s still a small mystery as to exactly when this Theater closed … a lot of people posted late 80s and I thought so too because I remember Clara’s Heart 88' shown there. Neil Patrick Harris speaking Jamaican patwa LOL … Who can forget that laughter from the theater!. I also remember a stupid movie that really pissed people off starring Bobcat Goldthwait called Hot To Trot in 1988. I actually walked out on that film. Bill and Teds Excellent Adventure 89' was there and the remake of Cape Fear 91 as well. According to a person that works for Rochdale I was told that the theater closed in April of 91 so this makes sense. I could swear that I remember a film entitled Stay Tuned {starring John Ritter} playing there and the year of that releasing was 1992 so who knows. It is also noteworthy that the owner of the theater Bernard B. Brandt, a co-founder and president of the Brandt Theaters chain, died in September 1985. I reached out to people who was related to him to try to get some photos of the theater but so far I have been unsuccessful. Aside from this one thing I find very strange is the fact that there appears to be no more ads or listings or even any mention of the Rochdale Theater in the newspapers after March 1985 even though the theater remained open for at least 5 more years.