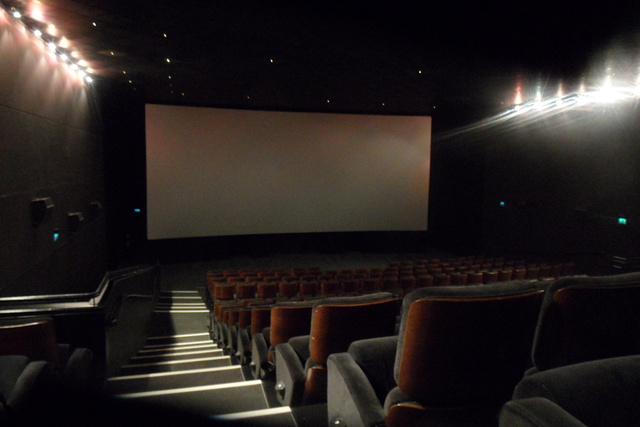 On my visit in August 2014 I was intrigued to notice that the information panels outside each auditorium (placed there, I believe, by Virgin, and setting out the seating capacity and details of leg room and screen size) also still recorded that projection is by Kinoton FP30s. This should now read NEC digital projectors!

The Parnell Centre was the Sheridan Group’s second development for MGM Cinemas; their first, at Dublin Road in Belfast, opened in 1993. While the Parnell Centre was still under construction MGM was sold to Virgin Cinemas which meant that this new nine-screen multiplex (offering 2,337 seats overall) opened as a Virgin. Richard Branson performed the official opening ceremony on 16th November 1995. The design was by UK-based Watson Design.

Dublin was one of nineteen Virgin multiplexes sold to UGC Cinemas in October 1999, and subsequently renamed UGC. In 1998 Sheridan opened a Sheridan IMAX cinema in another part of the Parnell Centre. It was a short-lived venture and closed two years later – see separate entry in Cinema Treasures. The UGC closed in 2003, in order to expand and incorporate the site of the former IMAX. Writing in ‘The History of Dublin Cinemas’ (2007), Marc Zimmermann said that by this stage the former Virgin Cinema had lost most of its original identity – its name, entrance and lobby, essentially becoming a new cinema.The new UGC, which was almost double the size of the old cinema, opened in stages during the second week of November 2003.

By December 2004 the cinema’s ownership had changed again, UGC having been acquired by Cineworld. It would be around 12th August 2005, though, before the cinema adopted its current name.