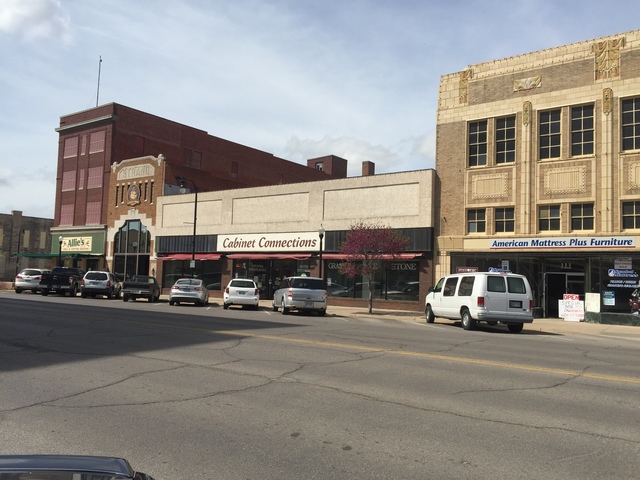 The Martin Theatre opened in 1913. It was renamed Deluxe Theatre by June 1914. In 1923 it was remodelled and the seating capacity was for 800 seats. After another remodel in 1929 by local architectural firm Mann & Company, which reduced the seating capacity to 550, Fox Midwest Theatres opened the Strand Theatre on April 21, 1930, in the former and renovated Deluxe Theatre. In June of 1930 the Hutchinson News noted that Fox now controlled all three of the local theatres, with the future Fox Theatre on the drawing boards.

In December of 1932 Ed Haas, manager of the Strand Theatre and Fox Theatre, was arrested and then posted bond over a violation of the Sunday closing law. Apparently this was a test case with Mr. Haas having the support of Fox West Coast Theatres, who paid a $200 fine. 400 local businessmen, who signed in favor of Sunday openings the previous January, also backed the theatre. Haas employees were also behind him. Amusingly enough, on one Sunday, after being arrested the staff would go to jail and post bail while another shift ran the theatre. When the first group returned, the other shift would go to jail, with all the free entertainment being watched by a large crowd of citizens on the street. The Hutchinson News reported on December 19, 1932, that after the third straight Sunday of movies the district court enjoined the city from arresting employees of the theatre. In January of 1933 the district court ruled that the Sunday closing law was “arbitrary, discriminatory and invalid".

Still a Fox Theatre, the Strand Theatre closed on July 5, 1960, with its waning days filled with 3rd run, horror, sci-fi, and exploitation films. One notable double bill in May was “Nude in a White Car” and “Woman Bait". Unlike 1932, the theatre management couldn’t even garner any free publicity by getting arrested for these gems.

Since 2008 the former Strand building has been home to Carl’s Bar with the Strand name still carved boldly in the top of the building.

Here’s an example from the De Luxe Theatre at Hutchinson, Kansas, of old-school, local movie publicity, or “ballyhoo,” as the industry called it in those days, as reported in the July 24, 1923, issue of The Film Daily:

“Hutchinson, Kans — The street car system of Hutchinson, was roped 100 percent, into helping exploit ‘Souls for Sale’ at the De Luxe. Each car on the system carried a four foot banner on the front fender.

“At a cost of $1.75 an hour an old street car was chartered and each side covered with a 24-sheet poster. The car was run through the city between the hours of 11 to 2, and from 5 to 8 the day before the opening and each day of the run.

“Cut-outs from the one-sheet were placed in 10 conspicuous windows; a shadow-box, 25 feet long, with lettering patterned after that on the six-sheet, was placed in front of the theater; a register was placed in the lobby in which girls who wished to receive a letter from Eleanor Boardman wrote their names.”

This house originally opened on May 10, 1913, as the Martin Theatre. I don’t know when it was renamed DeLuxe, but the DeLuxe Theatre reopened on March 17, 1923, after being remodeled. Wayne Martin’s original lease was for five years, so the house might have been renamed DeLuxe before the 1923 remodeling.

Recent pictures of the former Strand Thester in downtown Hutchinson in the Photo section. April 2016.

Unless Hutchinson had more than one house called the Deluxe, the name Martin might have been short-lived for this theater. The July 1, 1914, issue of The St. Louis Lumberman made reference to an event held in the “De Luxe” theater at Hutchinson on June 26.