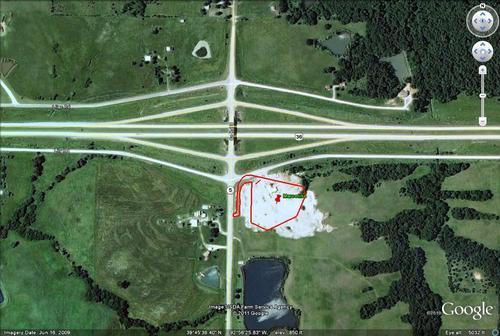 The address provided by jwmovies is too far to the west. Google Maps is often not good with exact addresses in rural areas.

The drive-in sat on the SE corner of the intersection. There is no trace of the drive-in remaining.

“the Star Drive-In at Marceline … has been forced to suspend operations until a new screen tower can be erected. The old one was left ‘in splinters’ following high winds which hit the community Friday afternoon (10). Considerable overall damage also was suffered to the speaker posts and grounds.” — Boxoffice, June 20, 1960

Two weeks later, Boxoffice, July 4, 1960: “The devastation was so complete at the Star Drive-In at Marceline Junction … that the owners have decided not to attempt repairs and they have put the property up for sale.”

The Goggle address does not work anymore.