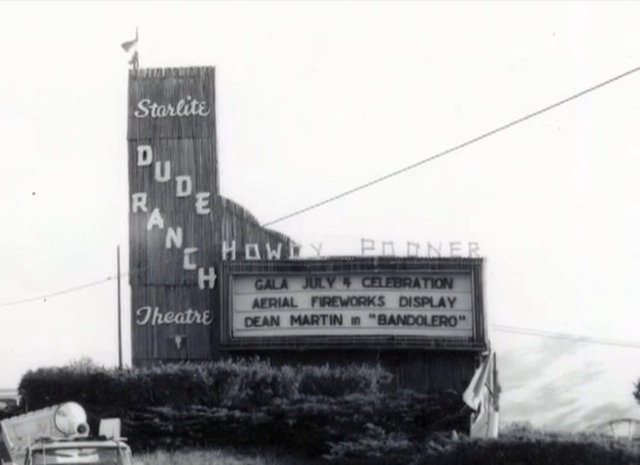 C.E. Cook opened and operated the Starlite Dude Ranch Drive-In on June 30, 1950. He also owned the Tivoli Theatre. The car capacity was listed at 350 and the drive-in was closed October 5, 1976 and was demolished in March 1977.

The Starlite Dude Ranch Drive-In Theatre launched June 30, 1950 with “The Younger Brothers,” a Bugs Bunny cartoon and “Calgary Stampede.” The 53' high tower with its distinctive rustic log cabin / Old West theme had a 33'x40' viewing area. The Chuck House was the nickname for the concession stand and rest room area which also housed the projection booth and a display room with farm-related relics. Employees dressed in ranch-style garb. Ten ramps provided parking for 350 cars and veteran Tivoli / Fern owner C.E. “Doc” Cook was the operator. The lot was modernized along with a larger screen to accommodate widescreen in 1958. By that time there were now 150 wagon wheels on the premises making it the most wagon wheels at any U.S. drive-in theater. And live animals were on the premises including “Peso” the burro, Polish chickens and monkeys.

The Starlight Dude Ranch D-I would pass to son, Jim Cook who would close up shop in 1976. The theater was also home to 26 consecutive years of church services with the tagline, “Bring your own popcorn.” But in late March of 1977, it was all over as the Chuck House and Drive-In were razed for the building of a K-Mart. When the drive-in closed for the season on October 5, 1976 the last feature ever at the Dude Ranch — appropriately enough — was “The Great American Cowboy.”

If Dallasmovietheaters is correct, then the address of 30001 US-71, Maryville, MO would be that of the South Cinema Drive-In, not the Starlight Dude Ranch since it was completely razed with a K-Mart built on the property.

According to the City of Maryville site, the drive-in was located about where Southerlands stands today. The address is 1718 South Main Street, Maryville, MO 64468. http://tinyurl.com/hb88wz9