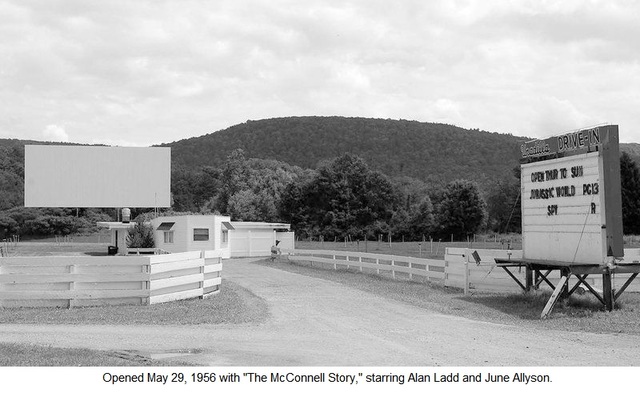 The Unadilla Drive-In was opened May 29, 1956 with Alan Ladd in “The McConnell Story” & Victor Mature in “Chief Crazy Horse”. One screen newly installed in the 2010’s; located near Oneonta; new digital projector system; renovated snack bar and bathrooms.

This is where I like to list the full history of the drive-in, but the The Daily Star of Oneonta beat me to it in an article on May 22, 2016. After noting that the Unadilla opened on Tuesday, May 29, 1956, it quoted the positive remarks of The Unadilla Times of June 1: “(G)ood public relations on the part of Mr. (John) Gardner and Mr. (Al) LaFamme would seem to insure another successful Unadilla enterprise.”

Then The Daily Star quoted its Aug. 22, 1986 article when “Michael and Beatrice Chonka were determined to keep their drive-in open, as they had for the last 17 years.” That put the purchase date around 1969.

“Chonka, a Binghamton native, started in the business almost two decades ago when Al LaFamme, who built the Unadilla theater, asked him to come to work. … when LaFamme wanted to sell some time later, Chonka bought the theater.”

Michael Chonka passed away in August 1994, and the theater closed earlier than usual. Trevor Ladner and Thomas Owens bought the Unadilla from his widow and re-opened it in late May 1995.

I’ll close with the article’s fuzziest paragraph. The Wilson family bought the Unadilla “(a)round 2000” It noted that the drive-in had updated to digital projection, but didn’t mention when. Also, “By an act of nature in recent years, specifically a windstorm, the old wooden screen that was knocked down got replaced by a steel structure.”

A long story in the July 15, 2016 PressConnects.com filled in a few details. “Unadilla’s current owners are Eric and Marcia Wilson, who bought the property in 2000”. The old screen went down “three years ago”. The Wilsons' children work there now, and Rob Tracey is the general manager.

The Daily Star’s article is a much better history than most newspapers ever see, and it matched the International Motion Picture Almanacs pretty well. The Unadilla made its first appearance in the IMPAs in its 1957 edition. It had a capacity of 400 cars and was owned by John W. Gardner and A. O. La Flamme (sic). They were both still there in 1959, although the listed capacity had grown to 500. In the 1961-66 editions, Gardner stood alone – a little odd considering the narrative above.

After the IMPA resumed listing owners, the 1978 edition listed “Chonka”, and that’s the way it stayed through the final IMPA list in 1988.