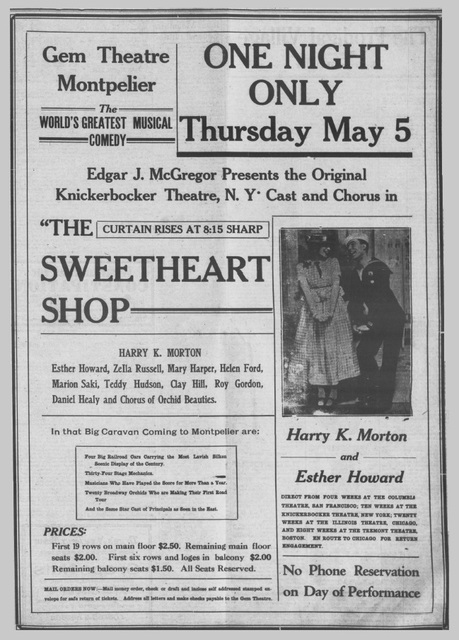 The Gem Theatre opened June 1, 1920 with “Desert Gold”. It was owned and operated by Walter Stevens. Pre-1927 Sanborn Insurance Maps show that it was previously the site of Sidney Stevens Implement Co. The News-Examiner noted that the first talkie to play at the Gem Theatre was “Broadway Melody” in December of 1929.

On February 10, 1935, the News-Examiner reported: “People on the east side of Washington Street were startled Thursday morning about 11:30 by a loud, reverberating crash, when the roof on the rear end of the Gem Theatre building crumbled and fell. The roof had been weakening for some time by leaks, which rotted the beams and supporting lumber. No one was in the theatre at the time of the accident. The interior of the theatre is in a badly mangled condition and part of the east wall is entirely gone.”

The 500-seat Gem Theatre never opened again as a theatre, however in February of 1936 an article in the News-Examiner noted that the building would be rebuilt, presumably for stores.

Architect of the theatre was J.C. Wood of Salt Lake City. First film was Zane Grey’s “Desert Gold” and the comedy short “The Grocery Clerk”