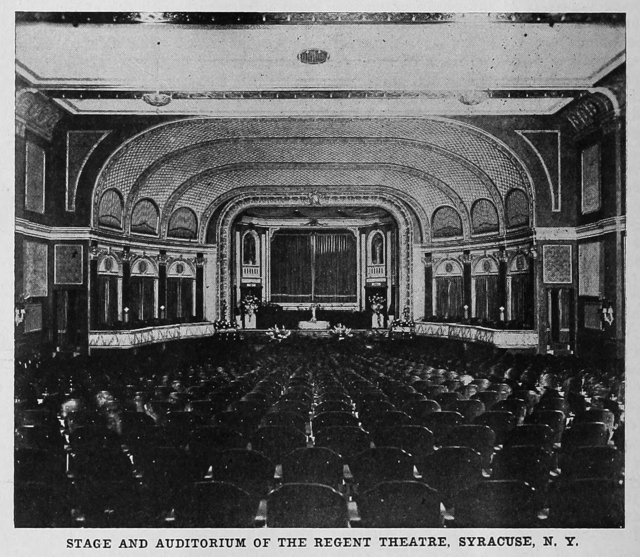 The Regent Theatre opened on August 22, 1914 at a cost of $100,000. The original owner was University Theatres, Inc., operated by Merton H. Schwartz. The auditorium seated 1,500, with 1,200 on the floor, and another 300 in box seats throughout the house. By the 1930’s, Kallet Theatres, Inc. owned the house, and operated it as a “second run exclusive” theatre for about twenty years. The Kallets remodeled it extensively in 1938.

In 1958, the Kallets sold the theatre to Syracuse University, who renamed it the John D. Archbold Theatre. In 1974, the theatre was made the centerpiece of the new Syracuse Stage company productions, where live shows are presented there to this day.

Syracuse Stage is not the name of a theatre. It is/was the name of the resident theatre company founded in 1974 by Arthur Storch.

As set forth in my new listing (under Regent Theatre) the Regent was sold to Syracuse University in 1958 who used the Regent primarily as a repertory film house until the Regent’s demolition in 1980. In 1980 the spot where the Regent Theatre stood was replaced with the 1.3 Million Dollar John D. Archibold Theatre which was a completely new build.

Known today as the Regent Theatre Complex (sometimes referred to as the Syracuse Stage Complex) it comprises three separate theatres combined with a cabaret, class and lecture rooms, offices, dance studio space etc. The three theatres comprising the Regent Theatre Complex are: The John D. Archibold Theatre built in 1980 with 499 seats; the Arthur Storch theatre with 200 seats and the Black Box Theatre a flexable 65 seat space.

I will just add to the above post that initially (in the 70s), Syracuse Stage, an Equity theatre, used what is now the Storch theatre, which was called the Experimental Theatre and I think may have used some of the original Regent theatre building. The SU Drama Dept. used the old Regent auditorium at this time, often using just the old stage for both patrons and performers (if I recall correctly). With the construction of the Archibold Theatre the Experimental Theatre was renamed the Storch after the founding artistic director of Stage and former chair of the Drama Dept, and the Drama Dept now uses it for its productions.