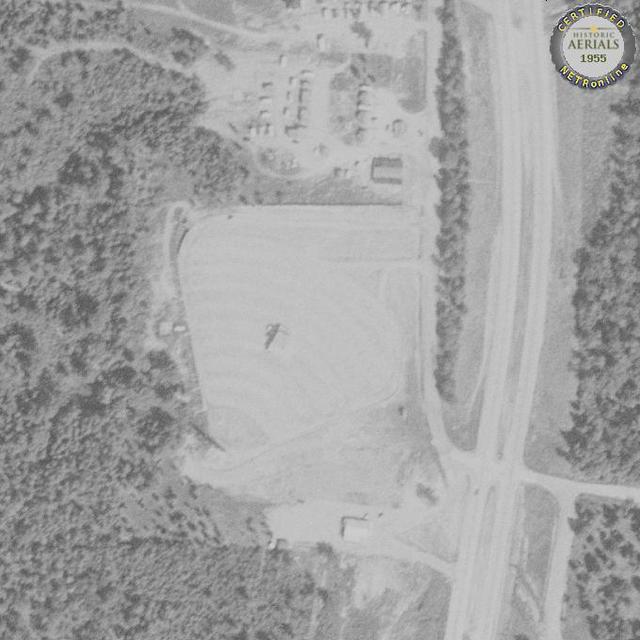 The Woodlane Drive-In opened in April 1954. Car capacity was initially 280 cars. The drive-in was operated by Commonwealth Theatres and closed in 1983.

According to Driveintheaters.com, this Drive-in is now Sellers-Sexton Ford Lincoln Mazda. Topography shows there was a Drive-in at this location in 1985 around its closing. It also looks like the screen foundation is still on the property to the southwest of the dealership.

There were occasional fly-in drive-in theaters, but the Woodlane is the only one I know to get its power knocked out by a plane crash.

The April 2, 1966 issue of the Springfield (MO) Daily News reported that a single-engine Stinson 106 was flying too low over US 66. It clipped distribution lines but kept going for several miles “with a power line trailing from its tail.” After breaking more power lines, including the one leading to the Woodlane, the plane crashed into two cars near the Fort Leonard Wood main gate and was destroyed by fire. Only minor injuries were reported, but the pilot was charged with “flying an airplane too low while consuming intoxicating beverages”.

An assistant manager, James Barnhart, was shot and killed by three soldiers from Fort Leonard Wood in an attempted robbery on July 20, 1960. The following February, the trigger man was sentenced to life in prison.

I believe this drive-in opened in July 1955. From the July 23, 1955 Motion Picture Herald: “The Woodlane drive-in theater, Waynesville, Mo., had its gala opening recently and the merchants of the city got together and ran a full-page advertisement in the Waynesville newspaper congratulating the management.”

The 1955-56 Theatre Catalog listed the Woodlane with a capacity of 280 cars, owned by Commonwealth Amuse. Co.

A “Drive-In” with no other information debuted under Waynesville in the 1955 Motion Picture Almanac. The next year, it was the Wood Lane, capacity 380, owner Commonwealth Amuse. Co. That’s how it stayed through 1976; the 1977 edition dropped the capacity of the “Woodlane” to 200 through to the final MPA drive-in list in 1988.

Did the Woodlane have a soft opening in 1954? Because of that 1955 MPA listing, it probably existed before February that year. And then there’s this cryptic one-sentence note, providing more questions than answers, in the Dec. 25, 1954 issue of Motion Picture Herald:

“The recently constructed Woodlane drive-in theatre at Waynesville, Mo., and all sound and concession projection equipment was destroyed recently.”

Looks like the Woodlane had more than a soft opening in 1954, based on what I just unearthed.

The Exhibitor, April 28, 1954: “The new Woodlane Drive-In, Waynesville, Mo., had a grand opening at which balloons were given to the children, flowers to the ladies, and cigars to the men. Prizes were given to the oldest person present, the car with the most people, and the oldest mother or father present. Commonwealth Company, provided a free playground for kiddies.”